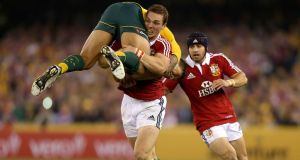 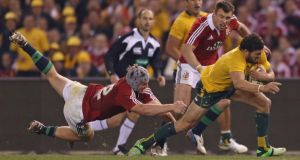 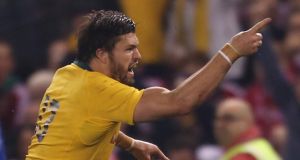 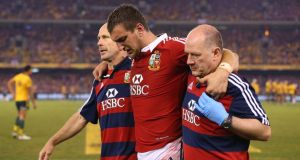 Australia 16 Lions 15: This always had the look of a game which would be decided by one moment, and long before the end, in truth, the Wallabies looked the likelier side to deliver it, most probably through Isreal Folau.

In the event, it was his carrying that infused the home side and crowd with the belief before Adam Ashley-Cooper’s 75th-minute try, converted unerringly by Christian Leali’ifano, not only levelled the series but made the improving Australia favourites to deny the wilting Lions again in the finale in Sydney next Saturday.

It was compelling, it was taut, it was truly intense, without ever flowing.

Stoppages for injuries were regular occurrences after some punishing exchanges, especially in the second-half, when the Wallabies ran everything at an unstinting and virtually impenetrable red line before ultimately the pressure told.

The Lions brought plenty of intensity, and their scrum, in which Mako Vunipola was heroic after a tricky start, did magnificently. But their lineout was under constant pressure without Paul O’Connell, and they didn’t have enough penetration without Jamie Roberts or a potent carrier in the backrow. Hence, they became too reliant on Halfpenny’s goalkicking and survived, in large measure, by dint of their defensive work.

Sam Warburton was immense. Dan Lydiate tackled his socks off, so too did all of them, really, including the 10-12-13 axis of Jonny Sexton, Jonathan Davies and O’Driscoll. George North and Tommy Bowe, whose chasing, aerial work and tackling were superb, had little opportunity to shine in attack.

The Wallabies showed more composure and better basic skills, and Folau was easily the most dangerous player on view - the wonder being why the Wallabies took so long to make use of him.

They generated quicker ball, and with higher skill levels, looked livelier when the game was unstructured. Most probably because of the dewey conditions typical of enclosed stadia, the ball became slippier as the night wore on, and may also have contributed to the frontrows sliding off each other om occasion.

Rugby is an outdoor game, to be played in all manner of conditions. It wasn’t meant for indoor arenas, and certainly not on dry evenings when, had the roof been open, conditions would assuredly have been more favourably disposed towards a good game.

The sense of occasion was spine tingling. Walking around the stadium beforehand, it had seemed as though the Lions fans were very much in the majority, with thousands of Irish accents mingling amongst the good-humoured throngs. Almost more so than last weekend in Suncorp, if that was possible, while there were some empty seats, not a sinner wasn’t bedecked in either red or yellow, with the home fans being handed out plastic yellow helmets beforehand.

As was the case a dozen years ago too, the darkened upper tier was mostly populated by supporters in red. The noise levels conveyed as much, with the booing which greeting the announcement of the Wallabies’ line-up reaching a crescendo when the name of James Horwill was announced.

The Lions had the better of the early exchanges, pouring through on loose Aussie ruck ball to force a turnover, and both Warburton and Jamie Heaslip - in stark contrast to Chris Pollock’s adjudication of Brian O’Driscoll’s early breakdown work - won turnover penalties for holding against Michael Hooper and Horwill.

The first breakdown clash between the respective opensides was an encouraging moment for the Lions’ captain.

From the first, and to the backdrop of Bread of Heaven, Leigh Halfpenny’s 50-metre penalty with the angle came back off the bar, only his third miss in 28 attempts on tour. From the second, Warburton opted to go to the corner. The Lions put their backs into the line and drew a penalty for collapsing, as they did when again going to the corner, but second time round, despite a yellow card warning, Warburton opted for the posts and Halfpenny opened the scoring.

After Jonny sexton kicked out turnover ball on the full, Folau outjumped North to fetch a crosskick from Kurtley Beale, standing in at first receiver, before Tom Youngs was pinged for a delayed put-in and Vunipola went to ground under pressure from Ben Alexander.

The Wallabies continued to go after the Lions’ fourth-choice loosehead, and when Joubert pinged Vunipola for collapsing the next scrum, Leali’ifano pushed Australia in front.

Adam Jones wrought revenge to atone for a Vunipola knock-on, though, when Benn Robinson released his bind and went down; Romaine Poite seemingly calling it.

Halfpenny drew the sides level again. Better still for the Lions, James O’Connor’s brain got ahead of itself and he fumbled. Vunipola then drove Alexander up and Halfpenny again drew a huge cheer for unerringly bisecting the posts from 45 metres.

This scrumathon wasn’t making for a thriller and, in between penalties, the occasion had become a little flat.

In what little passages of continuity there was, the Wallabies were keeping the ball a little better and generating more go-forward ball, through Wycliff Palu’s direct carrying, Will Genia’s sniping and the quick feet of O’Connor, Beale and Folau.

When Lydiate pushed up way too quickly, Leali’ifano levelled matters once more.

It picked up a little as half-time approach, Jonathan Davies undoing one attack with a poor grubber. In an aerial exchange, North brilliantly reclaimed one up and under by Halfpenny, turned bad ball into good with a strong carry, as did Heaslip when Ben Mowen didn’t release after the tackle and Halfpenny restored the lead with the last kick of the half from wide out on the right.

A huge bomb by Sexton drew a knock-on from Beale after the restart, but O’Driscoll’s pass was cut out by Folau, inducing a tremor of excitement amongst Wallabies fans, before he was hauled down by North.

Warburton won another penalty with another swiftly timed arrival at the tackle zone. When Genia quick tapped and the Wallabies went wide, they looked altogether more dangerous, but again the captain stemmed the tide.

Barely 14 minutes into the second half, Youngs, whose delayed put-ins weren’t helping the Lions on their own scrums, was replaced by Conor Murray - a big call by the Lions management.

Cometh the hour, Folau came up hard to tackle North who drew huge roars, both then and when repeated on the large screens, by effectively picking Folau up and driving him back.

The changes in the frontrow, particularly the decision to replace Adam Jones with Dan Cole, looked like they might potentially weaken the Lions scrum. Au contraire. Focussing on the tighthead side of the Wallabies’ scrum now occupied by James Slipper, the Lions drove the home scrum back and into the ground.

Up stepped Halfpenny to land a huge penalty from almost 50 metres, taking in the angle to make it 15-9. But the Wallabies wouldn’t go away, and there were distinct signs of the Lions wilting when Joe Tomane countered from deep on the left, and Folau broke tackles on the right, as the Wallabies forced a close-range penalty.

With eight minutes to go, Horwill opted for a five-metre scrum. The night’s biggest roar echoed around the stadium. This was it. When O’Connor ran hard as first receiver and popped the ball inside to Folau, the winger couldn’t hold on when tackled by Murray, but the Wallabies were rewarded within three minutes. O’Connor again fixed the defence, and critically Jonathan Davies one out, who left the gap for Ashley-Cooper to straighten through off O’Connor’s delayed pass.

From about 15 metres in Leali’ifano nailed the conversion.

The Lions had three minutes to save the night, but after O’Connor kicked out on the full from a ball passed to him from outside the 22 by Genia, Liam Gill pinched Richard Hibbard’s throw.

With one final throw of the dice from deep, first O’Driscoll pumped his legs in contact and then Sexton, wrapping around Bowe, bounced off tackles and the deck to carry to half-way, where James Slipper didn’t release after the tackle. About 10 metres in from the left and bang on half-way, it was possibly 55 metres for Halfpenny, with the 80 minutes up.

It was a huge ask, and in giving it more it landed well short for Genia to kick the ball dead.

The pendulum and the momentum have switched very much toward the Wallabies now.

3 Lions tour will not take place in Australia this summer

Owen Doyle: Culture of ‘clip memory’ among modern referees not cutting it on the pitch 13:30
European Indoors: Sarah Lavin and Sean Tobin clock lifetime bests to advance 13:20
Lions tour will not take place in Australia this summer 11:39
England all in a spin once again as India seal the series 11:00
The story behind the amazing growth of women’s Gaelic football 10:12
Crossword Get access to over 6,000 interactive crosswords