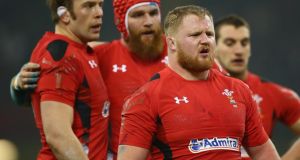 Samson Lee of Wales has been ruled out of the Scotland game. Photograph: Michael Steele/Getty Images

Wales were dealt a second major injury blow on Friday as they departed for a make-or-break Six Nations mission against Scotland at Murrayfield. Prop Samson Lee has joined wing George North on the sidelines, missing a game that Wales must win to keep alive their Six Nations title hopes.

Lee suffered a knock to his head during last week’s Millennium Stadium defeat against England and was unable to complete the final component of graduated return to play protocols. Ospreys tighthead Aaron Jarvis has replaced Lee in the starting line-up, with Cardiff Blues forward Scott Andrews named among the replacements.

Lee’s loss comes after it was decided earlier this week to rest North for the Edinburgh trip. North has been given an extended recovery period by Wales and he will not be involved in the Murrayfield encounter. He took two heavy blows to his head during the England game, and although the Welsh Rugby Union has consistently said he has been symptom-free in terms of concussion, he is now spending time recovering.

North (22) was concussed when Wales lost to world champions New Zealand last November and he sat out the following weekend’s Millennium Stadium appointment with South Africa.

Rugby union’s world governing body World Rugby said earlier this week that North should not have remained on the field against England after a clash of heads with team-mate Richard Hibbard. But World Rugby added that it accepted the WRU’s explanation surrounding the incident. North appeared to suffer a momentary loss of consciousness following the 61st-minute collision with Hibbard.

WRU national medical manager Prav Mathema subsequently admitted that had the second incident been seen by medics, then North would have been immediately taken off and replaced. Speaking prior to leaving for Scotland at Wales’ training base, Wales assistant coach Rob Howley said: “It’s obviously disappointing to lose a player of Samson’s ability.

“Aaron and Scott have been with us over the last couple of years, and Aaron came to South Africa with us last summer and came on in the second Test. We feel for Samson, as coaches do, but it’s important we move on and look forward to the opportunity it presents to both Scott and Aaron.”

Asked if Wales had considered contacting 95 times-capped prop Adam Jones, who recently announced his retirement from Test rugby, Howley added: “We respect players’ decisions and Adam has retired from international rugby. If Adam had made the call to (coach) Warren (Gatland), I’m not too sure, but I’m unaware of that.”

Despite suffering a second-half implosion against England and seeing an eight-point interval lead wiped out in losing 21-16, Wales head coach Warren Gatland’s only changes have been based on rest and injury, meaning a golden opportunity for players to redeem themselves.

And Wales boast an outstanding recent record against Scotland, winning seven successive games, including posting a 51-3 win last season after Scottish full-back Stuart Hogg was sent off midway through the first half in Cardiff.

“There is always pressure on selection,” Howley added. “You back your players, you trust your players. They are quality players. We’ve been here before as players and coaches, and the one thing about our players is that they have always reacted to what has been said over the last six days. We lost to England in 2011 at the Millennium Stadium and then went up to Scotland and played very well.

“It’s about being effective and being efficient with the ball. We know what is likely to come from Scotland, as they are playing in front of their own crowd for the first time in the Six Nations this season. They are confident and on the back of a tough game in France that they could have won. We are looking forward to it because we are at our best when our backs are against the wall.

“It was like a white wave coming at us (against England) and the players from a psychological perspective have spoken this week about it being hard. We probably didn’t expect it and it’s how you react to situations. No doubt it will happen again and we will have to react more positively and not be as conservative as we were against England.

“I am sure they (Scotland) will remember the last time they visited the Millennium Stadium. It’s one thing they will have on their minds. It’s one that has focused our minds. I am sure their motivation will be at its highest.”