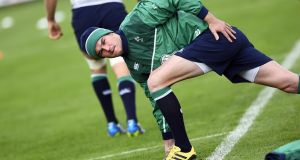 They did this to Ronan O’Gara before the 2007 World Cup showdown in Paris. Guess who’s in the subtlest of firing lines eight years on?

Mischievous French journalists wondered this week why Johnny Sexton didn’t perform to same level for Racing Metro 92 as he does for Ireland.

Well, he did, sporadically. There were a few injuries to consider.

“His departure is a failure,” said Labit. “For him and for me. We never succeeded in finding a good way to function.”

Sexton’s character, with quick temper and insistence of the highest standards attainable is long established as his greatest strength.

“Johnny is someone who is perpetually putting everything in question, and who obliges you to be constantly on alert. He didn’t always perform for Racing and he knew it. And it irritated him very much.

“Several times I had to remind him that there are certain ways of expressing things. Jonathan had the tendency to employ a rather forceful manner and use a colourful language in the heat of the moment. Sometimes it bordered on insults... at some moments Jonathan was really uncontrollable.”

Let’s see how Dan Carter, Sexton’s replacement in Paris next month, takes to the French way of preparation.

“He’s a perfectionist,” Labit continued of Sexton. “He doesn’t leave any room for failure. And because of this he doesn’t understand why his teammates aren’t more like him. That explains his incomprehension with the other players. He doesn’t accept that others should spend less time than him preparing for a match, and with his character he had trouble with that.”

“Over there, he’s the boss, the quarter-back of rugby,” Labit added of Sexton’s status at Leinster and Ireland. “It’s he who takes all the decisions.”

In the same piece an unnamed teammate at Racing, it is reported, gave Sexton one of the best back-handed sporting compliments.

“He’s the Zlatan Ibrahimovic of rugby.”

Devin Toner doesn’t so much disagree as show his full faith in Irish rugby’s alpha male.

“He’s the same as he was before, pretty much. I’ve played with Sexto since schools rugby so I’m pretty used to it to be honest.

“They mustn’t have been used to that, but it’s a hugely positive thing for the team,” said Toner. “If lads aren’t getting their roles right, he’s not going to do it for the sake of it, he’ll be doing it because there’s a reason behind it. It will be because lads aren’t in the right position or knowing their roles, so I think it’s hugely positive for the team. Obviously they weren’t used to it, but we’re glad to have him back to be honest.”

And the Zlatan comparison? “Well, we couldn’t even fathom that. He’s just another player with us, he’s not big-time, he’s the 10 who runs the show. He’s not big-headed, he’s a very down-to-earth guy.”

In mitigation a comparison to Ibrahimovic can be perceived in a positive light but the Midi article leads with: “Behind the comparison emerges hollow portrait of a player’s character well tempered.”

Toner instantly disagreed: “We don’t recognise that at all.”

Was he always such a dominant leader? “I think he grew into it. Back when we were playing schools rugby he probably wasn’t as dominant, but now he’s older and he’s learned the game and grown into it.”

And that, presumably, is the greatest assault the French media can muster for the week that’s in it.

Chelsea’s resurgence continues as they brush past Everton 20:29
Mullins string in fine fettle as they notch up a Leopardstown treble 20:25
Nothing of any concern found in inspection of Gordon Elliott’s stables 19:16
Reanne Evans and Ng On-yee offered professional tour cards 18:36
Leinster and Munster homing in on French opposition in Champions Cup draw 18:11
Crossword Get access to over 6,000 interactive crosswords