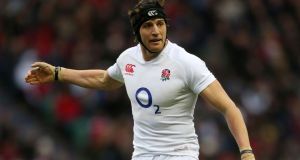 England’s Tom Wood will captain Stuart Lancaster’s side against the Barbarians and on their tour of Uruguay and Argentina. Photograph: David Davies/PA Wire

Northampton’s Tom Wood will captain a youthful England squad featuring 11 uncapped players for the fixture against the Barbarians and the summer tour of Uruguay and Argentina, head coach Stuart Lancaster has announced.

The flanker wil deputise for Harlequins backrow Chris Robshaw who, it was confirmed yesterday, will remain at home to recuperate after a long season and the disappointment of missing out on the Lions squad.

Chris Ashton, Danny Care, Toby Flood and Brad Barritt have also been given the chance to recharge their batteries ahead of an intense two-year build-up to the 2015 Rugby World Cup.

This time next year, England embark on a three-Test tour of New Zealand before heading into what is effectively a 14-month season that ends with the World Cup on home soil. England have provided 10 players to the Lions tour, and the quintet being rested by Lancaster will all be available to Warren Gatland should he need to call upon injury replacements.

James Haskell and Anthony Allen are not touring with England and will spend the summer overcoming knee injuries.

Lancaster will use England’s tour, which includes two Tests against Argentina, to develop strength in depth ahead of 2015 and he has turned to some of the brightest young stars in the Aviva Premiership. Wing trio Christian Wade, Jonny May and Marland Yarde will give England exciting firepower out wide while Lancaster will run the rule over Bath’s Kyle Eastmond and Saracens’ Joel Tomkins in the hope of increasing his midfield options.

Up front, Lancaster should finally get a chance to give loose forwards Calum Clark and Billy Vunipola a taste of Test match rugby while lock Ed Slater, flanker Matt Kvesic, prop Henry Thomas and hooker Rob Buchanan have all been rewarded for outstanding club seasons.

With Robshaw resting, Johnson and Kvesic will compete for the openside flanker jersey.

Harlequins’ Luke Wallace was close to selection while Saracens’ Will Fraser is also on the radar but is currently injured. Gloucester’s Freddie Burns will travel as first-choice outhalf, with Alex Goode his back-up, while Lee Dickson and Wigglesworth will compete for the scrumhalf jersey.

Wood was the obvious candidate to take over the captaincy, having been close to the honour when it was first given to Robshaw at the start of 2012.

England play the Barbarians at Twickenham on May 26th and a South American XV in Montevideo on June 2nd before Tests against the Pumas in Salta and Buenos Aires on June 8th and 15th. Although England are not at full strength and

Lancaster has selected with an eye on the future, he insisted it is more than just a development tour.

“The key principles in selection were three-fold: first and foremost to win the games but also to develop strength in depth and more options in certain positions and to give one or two players a physical and mental break,” Lancaster said. “We feel we’ve got the balance right and have given places to a number of players who have shone in the Aviva Premiership this season, one or two who have been on the fringes for a while and several players who have been involved over the last year or so.

“This is everyone’s chance to step up. Tom Wood will captain the side and I am sure he will do a fantastic job as he has the respect of all the players and management and we are looking forward to other leaders developing in the absence of some senior players. A few are being rested after a hard campaign but they will, of course, be considered by the British and Irish Lions should they be required.”