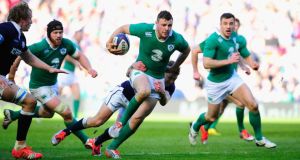 Ireland may have won the Six Nations title but it’s England who’ve been adjudged to have had the most prominent players in the tournament.

Four of the 12 players shortlisted for the 2015 RBS Six Nations Player of the Championship gong are English, three are Irish, and just two are Welsh - the three teams who finished joint top of the tournament table after the pulsating final day of play on Saturday.

Connacht centre Robbie Henshaw in his first ever Six Nations has been named alongside Munster’s Conor Murray and Paul O’Connell.

Among Ireland’s other pivotal players to be overlooked is Johnny Sexton who had made the shortlist for 2014 World Player of the Year after the November internationals.

Yet he, Jamie Heaslip and Sean O’Brien all missed out on action throughout the tournament due to injury.

Wales and Scotland have two nominees each, Dan Biggar and Alun Wyn Jones for the former and Jonny Gray and Stuart Hogg for the latter.

The inspirational Sergio Parisse is the only Italian to make the list despite his team avoiding the wooden spoon.

The RBS say that the selections were based on each player in the competition being “awarded (or deducted) points based on statistical performance across different action categories that cover all aspects of the game.

“To ensure fairness,” the competition organisers say, “the RBS Six Nations analysts have weighted the importance of different actions depending on different positions. These categories have been collated to give each player an overall performance score.”

Voting is now open on the website and closes at midnight on Wednesday.