Tadhg Furlong faces ‘The Beast’ in toughest challenge of career 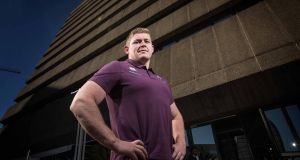 Tadhg Furlong: The 23-year-old will be making his full Test debut against South Africa in the lions’ den that is Ellis Park, Johannesburg, and in direct confrontation with Tandai Mtawarira. Photograph: Billy Stickland/Inpho

Tadhg Furlong falls into this category. The 23-year-old will be making his full test debut, against South Africa in the lions’ den that is Ellis Park, and in direct confrontation with Tandai Mtawarira, aka The Beast.

But whereas Furlong has half a dozen cameos off the bench this season, amounting to 103 minutes, Mtawarira is a vastly experienced 30-year- old now in his ninth season as a test prop, with 76 caps for the Springboks, not to mention 118 games with the Sharks in Super Rugby and a further 47 Currie Cup games.

When Furlong won his sixth cap as a 59th minute replacement for Mike Ross, Mtawarira had just been replaced, so this will be the first time he will encounter the Zimbabwean-born loosehead.

With Ross now 35, Furlong’s selection is clearly with one eye on the next World Cup cycle, but despite being rivals, Ross has been one of several to guide the younger man along.

“Rossy’s been great, Feeky’s (scrum coach Greg Feek) been great. I’ve been on a long road with them throughout the years, through Feeky’s time with Leinster and Rossy’s always been a helping hand, going through video with you and teaching you stuff.”

“Even his record, his consistency is something to admire as a prop; especially as a young fella looking up to him, coming through the ranks. The way he does it consistently every week is something you admire because from being out there I know how hard it is to do.”

Ross has been happy to embrace the role of mentor not just with Furlong.

“Heff (Oisín Heffernan) in the academy as well,” says Furlong. “It’s a strange thing, front-rowers seem to get on really well together off the pitch. I don’t know why but any team I go into they seem to always get on . . . But at the same time you can be friends but you’re still competing with that man and especially in Leinster I would have done anything to get ahead of him.”

It was interesting to hear Joe Schmidt compare Stuart Olding with Gordon D’Arcy yesterday, but no such similarities exist between Furlong and D’Arcy except the county they hail from.

“I suppose you could draw comparisons, but it probably stops there in terms of having a different body shape, different skill set. I’m not sure how D’Arce would have got on in the scrum,” says Furlong

As well as the Leinster and Ireland prop club then, Furlong will be proud of representing his home club New Ross (where his dad was also a prop) and his county.

“Absolutely, you think about it every time you go out. Rugby is a growing sport in Wexford. I suppose when you think of Wexford you think of hurling and strawberries. But rugby is definitely getting more exposure over there and if I can help rugby any way I can along its way I will.”

1 GAA players spend just 2.5 seconds within 2m of each other during play
2 How a GAA club sprang up in east Belfast over Sunday breakfast
3 Drew Brees apologises after LeBron James leads backlash to anthem comments
4 ‘Why do you need the money now?’: Schalke apologise for ticket refund questions
5 Connacht continue player hunt as six academy graduates promoted
Real news has value SUBSCRIBE

The Irish Times shutdown sports quiz: Part one 16:15
Rafa Nadal says he would not travel to US Open in present circumstances 15:09
Premier League to allow five substitutions per team when games resume 14:34
‘Why do you need the money now?’: Schalke apologise for ticket refund questions 13:50
Shane Long signs new two-year deal with Southampton 12:46
Here is your handy guide to sport on television this week