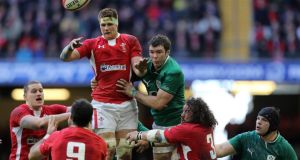 A simmering unease exists between Wales and Ireland.

Since the 2009 Lions tour of South Africa, the core of both sides are close Lions team-mates and bitter national rivals. It is the type of contradiction only found in the glorious complexity of rugby lore.

Long may it remain so.

For today’s winner the reward is the hope of a Grand Slam. Of even greater value to the players will be the satisfaction of proving to themselves and to the world that they are the superior team. The loser will be condemned to a minor placing and a seriously large helping of humble pie, will be shoved down their collective throats. Not a very appetising prospect.

Place in history
The motivations for both sides are vastly different.

Wales are the favourites to create history by winning the championship for the third year in a row. A seat in the Pantheon of all-time great Welsh teams beckons. An away victory in Dublin will pave the way to a championship and champagne corks popping in Cardiff in late March. A much more tasty prospect than a losing pint of Welsh Bitter.

Revenge is a base emotion, yet one of the greatest motivations. For Ireland, the fuel that stokes the fire of desire could not be more different from the Welsh. A recent history of underachievement and the passionate desire to prove they are better than their Lions team-mates, means that even at home, Ireland are the underdogs.

Ireland will have to play close to the maximum of their considerable talent if they are to overcome a Welsh team aiming to touch greatness.

Do not be fooled by all the talk of last year’s Lions tour selection. This is a mighty Welsh team, full of big, fast, aggressive and highly-talented rugby players. An Irish victory will rightly be judged as a great one.

Last November the defeat at the hands of New Zealand was as sickening as I have witnessed. In the midst of the gut-wrenching pain of that day, the Irish players acquired some useful self-awareness.

Ireland proved to themselves that they can stand “toe to toe” and slug it out with the best in the world. They also learned that difference between the great performance against New Zealand and the terrible outing against the Wallabies, had nothing to do with the coach.

To quote Longfellow: “Not in the clamour of the crowded street, not in the shouts and plaudits of the throng but in ourselves are triumph and defeat.”

Responsibility for victory or defeat lies within the players’ control.

Wales are the best team in the northern hemisphere and they are a true test for Ireland. This testing will be on many levels and will take many forms.

The Welsh know Ireland are a set-play team. They will counterattack kicked ball rather than go for touch. This will deny Ireland lineouts from which they prefer to launch attacks.

Last November against Australia the Welsh defensive coach, Shaun Edwards, sent a “shooter” out of the line to attempt to force Quade Cooper to pass the ball early and not take on the defensive line.

I expect a Welsh defensive tactic similar to this, an attempt to force Johnny Sexton to play behind the gain line. This is a high-risk policy as a shooter leaves a hole in the defending line. Ireland can attack this gap.

Gordon D’Arcy being reunited with Brian O’Driscoll is the correct selection. This double act know how to tackle a bigger back line into submission.

Their body positions after the tackle is technically brilliant and it will slow the Welsh ruck ball. After every tackle, O’Driscoll’s body position is legally on the attacking side of the ruck. It is Richie McCaw without the gamesmanship.

In a match that promises so much, perhaps the key for Ireland rests with what the Welsh believe is an advantage at the breakdown. The Lions captain, Sam Warburton, returns and will be marked by the under rated, Chris Henry.

I first selected Henry for Ulster in a Heineken Cup match against Harlequins at Ravenhill in 2009. That day his play was superb. In almost every game since, he has improved.

Henry must stop Warburton dominating the first phase of Irish attack. If Henry studies the first Lions Test and copies how Matt Hooper, the Wallaby open side, muted Warburton at the breakdown, by simply stepping in front of him and stealing his running line, Ireland will have a chance. It will not be easy. In the second Test, Warburton took Hooper apart.

Like all true Test matches, this game will examine the character of the individual and the collective. I believe in the statement, “Test match rugby does not create character, it reveals it.”

With so much at stake, so early in the championship, this match will be won by the team with the greater resolve and character. The Welsh want to create history and Ireland believes that, on their day, they can outplay the best on the planet.

It is up to the Irish players to display their true character and guarantee that today is their day.