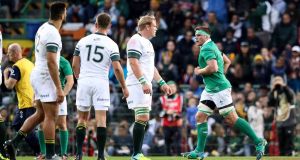 The saga concerning CJ Stander’s disciplinary hearing and his fate for the remainder of the tour was finally resolved after the judiciary officer, Australian Terry Willis, eventually concluded the hearing late into its second day around teatime. Stander has been suspended for one week following his red card in last Saturday’s first test.

This means the South African-born Irish flanker will be suspended for next Saturday’s second Test in Johannesburg but will be available again for the third Test in Port Elizabeth on Saturday week.

The Irish management were awaiting the written report, which presumably will be fairly lengthy, before deciding on whether to appeal or not. They have 48 hours to decide. In the interim, they will not be calling up a replacement.

In accordance with an incident in which rarely has a red card so polarised opinion, such have been the complexities of the case that it has effectively run into a third day. Stander was sent off in the 23rd minute of Ireland’s 26-20 win over South Africa last Saturday for colliding with his hip into the head of the Springboks’ Pat Lambie in his follow through after jumping in attempt to block the outhalf’s chip.

This was apparently so as Willis could consult with a sports biomechanist after Ireland, who had engaged a South African lawyer who has represented foreign players in disciplinary hearings before, cited another example in the second-half of Willie le Roux making slight contact with Paddy Jackson in attempting to do as Stander had done and when also unable to change direction in mid-air.

Willis, a Sydney-based barrister, is highly experienced in disciplinary hearings in rugby. He has been chairman of the New South Wales RU’s judiciary since 1992 and was part of the panel which handed Duncan McRae his 12-week ban for assaulting Ronan O’Gara in the Lions tour of New Zealand in 2001 and more recently he banned Sean O’Brien for the World Cup quarter-final for punching Pascal Pape in Ireland’s final pool game.

“Probably, the fear I do have is I have no doubt that they’ll be improved in Johannesburg.

“We’re incredibly excited by the little bit of history, the small step we took but there’s still two incredible large steps to take, one of them at altitude that will be very tough,” Schmidt added.

Saturday’s second Test is in the thin air at Ellis Park, 1,810 metres above sea level. The third Test is back down on the coast in Port Elizabeth on June 25th.

“They probably let us off the hook a couple of times,” Schmidt said. “As much effort as we put into the game, there was a little bit of inaccuracy sometimes from the Springboks, a couple of dropped balls when they really had us starting to go backwards defensively.”

Schmidt also said he might be tempted to change his team selection and use the opportunity to offer players valuable international experience. “We’ll make a decision on that later in the week,” he added.