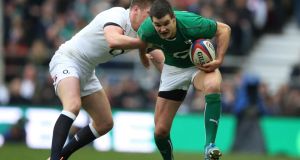 Jonathan Sexton is tackled by England’s Owen Farrell. The Ireland outhalf has had better days with his decision making and kicking. Photograph: Billy Stickland/Inpho

It was a suitably grey and grim Sunday morning in London, but as Gordon D’Arcy forecast the sun would shine again and it duly did so – brilliantly, yesterday morning. Life goes on.

Defeats happen. But in the cold light of day, a first Six Nations title since 2009 and only a second championship since 1985 would be well worth savouring and a fitting way of sending you-know-who off into the sunset.

So the Irish front-liners will regroup in Belfast on Wednesday and Thursday with plenty still to play for. And after finishing runners-up on five occasions in the Six Nations (thrice on points’ difference), winning the title and being crowned European champions in a year when Ireland had to travel to London and Paris would not be too shabby.

Of course, a Grand Slam would certainly have been preferable given the mystique attached to the ultimate prize – not least in Ireland given just two to date. But winning a title would be eminently preferable to finishing second again. Recall too, how envious Irish rugby was of Wales retaining the title on the final Saturday last year, not to mention the joyous scenes of 1985 under Mick Doyle when Michael Kiernan’s drop goal clinched the title.

Pool rivals
Admittedly, Ireland also nailed a Triple Crown that day and won the title with seven points after a 15-all draw at home to France in a bruising encounter, and similarly, as Joe Schmidt intimated, Ireland would have been entitled to sacrifice a crown and take a shot at goal for the draw if Craig Joubert, or Romain Poite, had spotted Tom Wood playing the ball with his hand in the scrum.

Others will play better. Although his darts and work-rate were good, untypically Rory Best missed six tackles. Johnny Sexton has had better days with his decision-making and kicking, although even after the risky chip and risky restart at 10-3 and 10-6, Ireland still earned a relieving penalty and scrum pressure away from danger. We can’t blame everything on playing for Racing Metro but his absence again this week is not helpful, and compare and contrast with Stuart Lancaster discarding the Toulouse-bound Toby Flood.

Ireland could do with more X-factor, but Tommy Bowe, Keith Earls and Craig Gilroy are laid low and one can be sure Schmidt has forensically examined the form of Simon Zebo (and Tommy O’Donnell) for not picking them last week. Zebo needs to up his work rate and defence, but if he listens to Schmidt he will assuredly become the superstar he can be.

Italy stand in the way of a grand finale if not a Grand Slam in Paris as the proverbial banana skin and they will be distraught at the manner in which they lost their targeted fixture at home to Scotland. Ultimately though, winning in Paris is tough for any visiting side. Ireland know this better than anyone and England discovered this in round one.

French defections
One hopes France continue in their current vein through to the World Cup. The loss of Wesley Fofana and Yannick Nyanga deprives them of key carriers and Louis Picamoles will not face Ireland, having been dropped from the squad yesterday.

Admittedly, this will probably mean recalls to the starting XV for Morgan Parra and Gael Fickou, who should have been playing all along, and one ventures that come the Saturday finale in Stade de France Rémi Tales will be starting ahead of Jules Plisson, whose deep alignment and tendency to turn towards the touchline does those outside him few favours.

A Welsh win in Twickenham would probably suit Ireland’s needs best. They travel with renewed momentum after their handsome win over France; and recent history has shown us Wales are invariably more dangerous when confident. It suits their mentality.

Several of the Welsh forwards were a little under cooked against Ireland after recently returning from injury. Gethin Jenkins and Adam Jones had their most effective outings of the season and Sam Warburton was the game’s most influential player against France.

Jake Ball’s selection in the absence of Alun Wyn Jones proved inspired and Rhys Webb speeded up the tempo of their game, while the French seemingly hadn’t observed Ireland stationing Devin Toner at the tail and thereby forcing Richard Hibbard to throw to the front or the middle.

George North’s try came from ball off the tail via Toby Faletau, Warburton’s from a throw to the captain at the tail and Jamie Roberts trucking it up the middle, before Warburton came around the corner to score. Classic route one Welsh rugby. It really shouldn’t have been a case of quelle surprise! What exactly do they do out in Marcoussis?

As when losing to Ireland in their opening game last year, a win over a desultory and distracted French outfit has given Wales a timely fillip. Wales won at Twickenham two years ago and they routed England in the finale last season, while Gatland also won there in 2008 as Welsh coach, not to mention three successive Premiership finals with Wasps in 2003, 2004 and 2005, as well as the Heineken Cup final of 2004. They will travel to Twickenham with few fears.