RTÉ, BBC and ITV aim to buy rights to Six Nations Championship from 2018 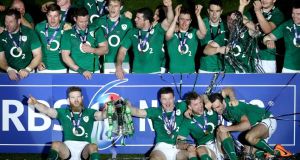 RTÉ, and by extension an Irish sporting audience, could be collateral beneficiaries from an alliance between the BBC and ITV to buy the live broadcast rights to the Six Nations Championship from 2018, a move that if successful will keep the tournament on terrestrial television.

The proposed deal is worth €70 million per annum to the Six Nations organisers.

The Six Nations Committee opened up the bidding process for television rights to satellite companies for the first time but the anticipated heavyweight financial clash between Sky Sports and BT Sport never materialised, as the latter showed scant interest.

The Irish Times understands that Sky would have also looked to be rights holders in the Irish market if they succeeded in Britain but for a variety of reasons that will not be the case with the BBC and ITV bid.

In February, there was a very real concern that the Six Nations could end up as pay to view. John Feehan, Six Nations chief executive, explained at the time his dismay at politicians who publicly supported a free-to-air (FTA) mandate in Ireland for the tournament.

“That’s a really negative thing for us because . . . the reality is you get really hurt badly by the [FTA] broadcasters if they know that there’s no real market or competition for them.

“Now, if the Irish scenario hurts the broadcasting deal that can be done in the UK because of problems with Sky or BT or whoever it may be, that could have a very serious impact on the actual revenues.”

About three per cent of the Six Nations revenue comes from the Irish market.

RTÉ have the rights for the Six Nations up until and concluding the 2017 tournament and the expectation is that a new deal for either a three- or four-year period can be brokered reasonably quickly.

Sky Sports did offer the most money after the bidding process in the UK finally closed last week but not enough to persuade the Six Nations Committee to risk the opprobrium and outrage that might have followed if the tournament was no longer free to air.

BBC, the current Six Nations rights holders – the existing deal is worth €56 million – entered into dialogue with ITV, who have the rights to the upcoming World Cup but have no interest in bidding for the whole tournament, and an agreement was reached to underwrite a joint tender.

The Six Nations are currently negotiating an agreement for the British live broadcast rights before turning their attention to the Irish market but that process will be expedited once they adjudicate between the BBC/ITV and Sky offers.