Who holds the upper hand in the key battles?

On the back of a disastrous World Cup, can new coach Eddie Jones lead England to a first Six Nations title since 2011? John O'Sullivan reports. Video: David Dunne 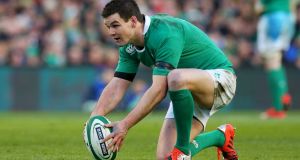 Jonathan Sexton lines up a penalty kick during the Six Nations match between Ireland and England at the Aviva Stadium in March 2015. Ireland’s No 10 is key if his side is to win at Twicenham today. Photograph: Alex Livesey/Getty Images

Beg to differ? Let us know your views in the comments.

Kearney’s footwork in contact was generally excellent against France. Brown’s form is nowhere near the quality that won him 2014 Six Nations player-of-the-year and England look sharper in attack when Andy Goode comes on.

Trimble has been sharp in defence and will have to be so again against one of the in-form backs in English rugby. Nowell is a strong, quick and beautifully balanced runner and lethal in open play.

A new role for Henshaw at test level. He has the talent and capacity to play 13 but defensively it’s a steep learning curve. Joseph’s possesses superb footwork and pace. He gets the nod because he plays this position regularly.

Thoroughly deserved call-up for McCloskey. It’s important that he uses his feet and hands intelligently to complement his physical qualities. Farrell’s distribution is impressive and he’s a doughty competitor but McCloskey, despite being on debut, can give Ireland an edge.

Earls looked very sharp in the Welsh match and that’s important against a player who has caused Ireland some alarming moments in the past. This battle really does depend on who is doing the attacking and defending.

If Ireland are to win at Twickenham, then Sexton is likely to play a pivotal role both with the boot and his distribution. Ford’s suffering a little bit of second season syndrome but there’s no doubting his quality of temperament.

Youngs rarely has a middling match, either brilliant or anonymous. Loves the quick tap penalty, and has benefited from the pressure exerted by Danny Care. Murray needs to be at his sharp, decisive best for this tussle.

A key tussle especially at scrum time. Both players give away odd penalty but Cole tends to be the bigger sinner. McGrath has been Ireland’s outstanding forward and will need to reach those levels again.

Best had a relatively quiet game by his standards against France, while Saracens hooker Jamie George is starting to put serious pressure on Hartley. The lineout is a crucial platform and both will have to be pitch-perfect.

Another arm-wrestle between former Harlequins teammates and it normally requires all of Ross’s energy to try to keep his feisty rival in check in the scrum. Marler will do more around the pitch, knowing that he’ll be gone in 60-minutes.

Everything about Itoje from his time with underage England teams suggests he’ll captain the national side. To go with his leadership he has athleticism, mobility and good instincts. Toner needs to bring his experience to bear in all facets.

Huge opportunity for Ryan to nail down the jersey for the remainder of the championship but to do so he’s got to raise his game. Kruis has successfully translated his club form to England.

Robshaw has begun to show decent form at club level and unshackled from responsibility, it should benefit his game. Stander couldn’t have made a much better start to his Ireland career.

Haskell is a leader in the defensive line. Van der Flier earned this chance and as a genuine openside could cause the home side plenty of problems at ruck time and in wider channels.

Vunipola was man of the match in England’s first game against Scotland; his carrying was a big factor. He needs to be chopped at source. Heaslip, solid against France, will want to get back to the excellence he demonstrated against Wales.

The return of Cian Healy will be a significant boost in power terms while Irish supporters will be fascinated to see if one potential debutant, the hugely promising Ultan Dillane, can make an immediate impact at test level. Rhys Ruddock is another perfectly suited to the demands of the game when introduced. But there are a number of players on the England bench – Jamie George, Alex Goode for example – that are arguably playing better than those starting in the team and that has to be a concern for the Ireland later on in the match.

1 Ireland backrow of O’Mahony, Van der Flier and Stander to be retained against England
2 Triple bogey costs Rory McIlroy as Adam Scott prevails at Riviera
3 On healing and wild hurling: The re-education of Diarmuid Lyng
4 Newcastle feel the heat as Arsenal get some of their old mojo back
5 Gambling advertising in sport: How much is too much?
Real news has value SUBSCRIBE