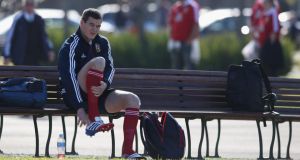 Jonathan Sexton puts on his boots ahead of the British and Irish Lions captain’s run at Scotch College in Melbourne on Friday. Photograph: by David Rogers/Getty Images

The British and Irish Lions expect Australia to throw everything bar the kitchen sink at them in Saturday’s second Test but the tourists are also hoping to show what they can do in attack, outhalf Jonny Sexton said on Friday.

The Lions held on for a 23-21 victory in the first Test in Brisbane last week and Sexton thinks they have a point to prove at Docklands Stadium.

“I don’t think we really got to implement our gameplan last week, we didn’t show too much,” the Irishman told reporters on Friday.

“We’ll look to try to attack them this week. We didn’t really get the chance last week, we’ll have a go this week.”

The Lions played some brilliant attacking rugby in their tour matches and the threat Sexton poses to defences with front-foot ball has in large part earned him the outhalf role over England’s Owen Farrell for the Test matches.

On Saturday, he will have a different halfback partner in Ben Youngs after the Englishman was preferred to hulking Welsh scrumhalf Mike Phillips.

“It’ll be different, but they have a lot similarities,” the 27-year-old said.

“They’re obviously different in size, but they’re both pretty abrasive, even though they’re different sizes.

“They both want to play a quick game. It’s not going to take that much getting used to. I’ve had a good few days with Ben. Hopefully we’ll click. He brings a lot to the game in terms of his running ability.

“We had a little bit of game time at the end of the (Queensland) Reds game. We’ve had all week training. It’s been good. We’re pretty much in the same wavelength now.”

The form of Welsh flyhalf Leigh Halfpenny has meant Sexton’s place-kiching game largely surplus to requirements so far for the Lions.

“It’s different,” he said. “I worked all year with this in the back of my mind. It just hasn’t happened. Every minute I’ve been on the pitch, Leigh has been on the pitch. You can’t argue with his stats.

“I continue to work hard in case Leigh goes down or has a bad day. I’m working like I am kicking. Obviously I’d like to.”

Sexton’s opposite number on Saturday will again be James O’Connor, who will be making only his third start at outhalf for the Wallabies.

Despite O’Connor not having the best of matches in Brisbane last week, Sexton believes he remains a threat.

“He’s a handful when he’s got ball in hand and he’s running at guys,” he added.

“We made sure we shut him down. Think we did an okay job. There were times when he got halfway through. That’s his big strength.

“I thought he did well, obviously missed a couple of shots at goal but I don’t think he was planning to take the kicks. He’s played a lot of positions, he’s settled at 10 now and he’ll only getting better going forward.”

Sexton said he would love to wrap up the series 2-0 on Saturday, if only for fellow Irishmen and Lions stalwarts Brian O’Driscoll and Paul O’Connell, who have never tasted a series victory in the famous red shirt.

He was also very happy that prolific Irish winger Tommy Bowe gets a start on Saturday despite having fractured a bone in his hand during the victory over the Reds earlier in the tour.

“I’m delighted he’s back,” said Sexton. “To break a bone in your hand and then to play three weeks later is a pretty phenomenal recovery.

“He thought his tour was over and he was pretty upset about it. For him to turn it around I’m delighted for him.

“He’ll bring a lot to us in terms of his ability in the air, his strike running and his work off the ball.

“He’ll be calling moves on himself all day, he’s mad for the ball.”