Sexton enjoys rub of the green 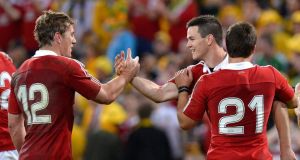 Jonathan Sexton tonight admitted he thought the game was up when Kurtley Beale had a chance to break British and Irish Lions’ hearts in Brisbane. Beale slipped at the crucial moment when he attempted an 80th-minute penalty from just inside Lions’ territory.

Had the kick gone over, the Lions would have been left to lament a one-point defeat rather than a gripping 23-21 victory that put them one up in the test series with two games left.

“In many ways it felt like it was gone when the penalty was given, and obviously we got a bit of luck with Kurtley slipping,” Ireland outhalf Sexton said after today’s game. “If it was the second test, I am sure there would be massive celebrations, but the way we won it and it is only the first test, there weren’t big celebrations.

“We know there is one more to go until we do something that will be remembered.”

Beale also missed a penalty chance just five minutes earlier, and Sexton added: “In my head, if he had got that I knew we had time at least to go and try to get a drop-goal or a penalty, so that was all I was focusing on then. But then with the last kick, the clock was up. Once he had lined that up it was all or nothing. It was win or lose, so it was out of your control then.

“We will never know if the ball would have gone over if he didn’t slip, and he kicked a few good ones before that. The pitch was tough and it was a scrum penalty as well. The ground was all churned up and it would have been tough for him to find a decent spot.”

The Lions prevailed through tries in each half by Wales wings George North - a blistering 60-metre solo effort - and Alex Cuthbert, while fullback Leigh Halfpenny kicked 13 points. Debutant wing Israel Folau scored both of the Wallabies’ tries, but they also accrued a succession of injuries, with centre Christian Leali’ifano, fullback Berrick Barnes and substitute Pat McCabe all carried off.

“It was pretty hectic, pretty crazy out there at times,” Sexton said. “It was frantic, tough to control at times, and luckily we have a lot of good leaders in the team that meant we were able to manage the game well at times. At times we didn’t manage it so well. So there are things we need to improve on, and we know there are fine margins and we need to make sure we improve again next week.”

Sexton also praised North, who had been a doubt for the opening test as he battled back to fitness following a hamstring injury. “What a try!” Sexton added. “It was a massive boost for us to get him back before the game with the hamstring (injury) that he had. When a guy with that size gets up to that kind of pace, Berrick (Barnes) is a good defender but he wasn’t going to stop him.”

1 Cheltenham faces criticism after racegoers suffer Covid-19 symptoms
2 Ian O’Riordan: Learning to run for the first time all over again
3 Coronavirus crisis could cost the GAA up to €60 million
4 Karen Robinson Walton: I am looking at him. I say ‘Benjamin, what have we done?’
5 America at Large: On Long Island, longing for a return to our field of dreams
Real news has value SUBSCRIBE