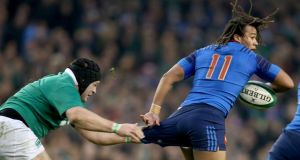 Ireland’s Mike Ross holds on to the shorts of French winger Teddy Thomas to make a vital tackle during the Six Nations match at the Aviva Stadium. Photograph: Dan Sheridan/Inpho

Ireland were outplayed here and had to send extra numbers in to try and hang on to possession. As a result France had a numerical superiority defending either side of rucks. This enabled them to be aggressive in their line speed and double-team Irish ball carriers, that were easy to identify based on simple mathematics.

Denied quick, front-foot ball for the most part, Ireland were limited in options and didn’t, according to the official statistics, make a single line break. The only time the home side got in behind the French was from a quick ball off the top in the visitors’ 22, a move that foundered with Jonathan Sexton’s unsympathetic pass to Jared Payne.

If Ireland can’t get quick ball they don’t have the size to batter teams out of the way. They are going to have to be speedier and more efficient in clearing out or else look at getting the ball away in the tackle. Ireland managed two offloads to France’s 12.

Ireland ‘lost’ two of five scrums and one of 13 lineouts. France had edged the scrum contest but the arrival of Vincent Debaty saw Mike Ross penalised twice. The home side had to work exceptionally hard on their own put-in and it’s an area that had leaked a handful of penalties in the opening two matches of the tournament. Ireland’s driving maul was pretty effective on a couple of occasions as was the option to take a couple of lineouts off the top. One overthrow to Seán O’Brien was redeemed by a French knock-on. 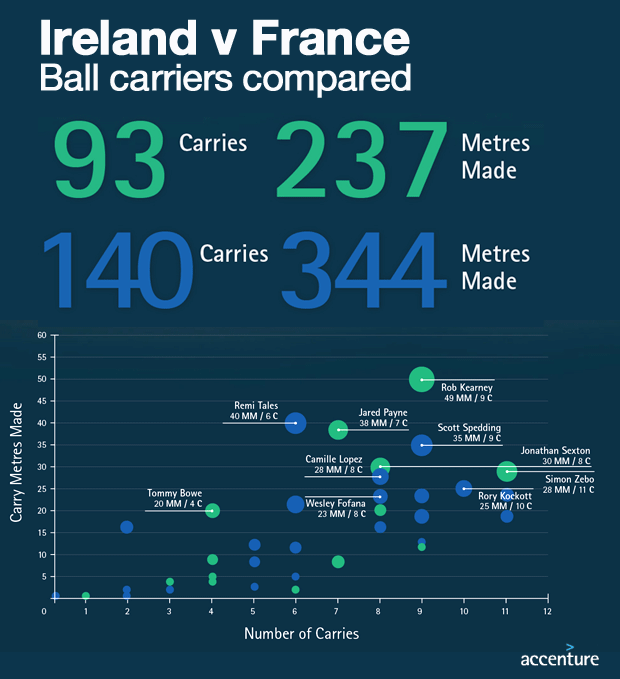 Robbie Henshaw and Jared Payne had an excellent game as a combination, both in defence and also in tidying up static possession and getting their team over the gain-line. Henshaw was Ireland’s leading tackler (15), while Payne’s 35 metres was the second highest total on the team behind Rob Kearney. The latter’s footwork is exceptional as is his knack of finding some room where none appears to exist.

Ireland coach Joe Schmidt will be trying to find a way to better utilise Payne’s canny running lines, while using the player’s playmaking skills, distribution and peripheral vision to put players away in the outside channel. The Irish midfield did a pretty good job in largely containing Mathieu Bastareaud – he still periodically managed to drag three tacklers for several metres and offload – and Wesley Fofana.

The replacement French scrumhalf made a massive difference when introduced for Rory Kockott. His game management was exemplary, varying the point of attack, using his big runners close in and then sweeping ball away to stretch Ireland in wider channels. If Parra’s decision-making and precision had been matched by his halfback partner Camille Lopez then the home side would have been in serious trouble. The latter threw some poor passes, two into touch, that undermined his own team. Parra chivvied and manoeuvred his team into the right areas and injected a high tempo that had Ireland hanging on for dear life.

Against a physically bigger side, Ireland scrambled well for the most part – Mike Ross made one memorable and potentially try-saving tackle on Teddy Thomas – and varied the line speed until the last quarter when the sheer physical toll became evident as the French ball carriers began to make serious yardage, attracting multiple tacklers, to put them on the ground. Instinctively they offloaded more often and to great effect, manifest in the build-up to their try. The Irish team made 143 tackles (France 88) and were credited with 20 missed ones. In fairness the Irish players deserve credit for effecting nine turnovers to their opponent’s four.

Not sure a lack of creativity fully identifies the problem but Ireland haven’t been effective enough in this facet of the game. Against France, the wraparound, and cutbacks didn’t yield significant gains, nor did the carrying on the fringes or cross-kicks. Others aspects of the game have a knock-on influence on how effective a team’s attacking patterns are and these are issues that the team will have to resolve to be able to unpick opposing defences. They are not going to run over physically bigger teams so they’ll have to more precise, creative and execute better.

Absolutely superb and a credit to Jonathan Sexton’s pinpoint accuracy and the Irish chasers, particularly Rob Kearney and Tommy Bowe.