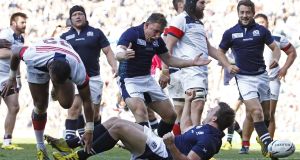 Matt Scott scored one of Scotland’s five second half tries as they beat the USA 39-16 at Elland Road. Photograph: Reuters

We should have known a giant-killing was in the air when the USA took a trip to the nearby Royal Armouries a few days ago and found themselves swordfighting. When push came to shove however, Scotland were able to call on the cavalry and march back to the top of their World Cup pool.

Trailing at half-time by seven points to a side who had not beaten a tier-one nation since overturning France at the 1924 Olympics, Vern Cotter summoned his heavyweights from the bench and Scotland duly ran in five second-half tries to collect a second successive bonus-point victory.

As was the case against Japan on Wednesday, all five of their tries were after the break – either Cotter has his side supremely fit or does not know his best XV – but South Africa will be taking note of a jittery first half and a juggernaut second.

For the USA, it was the second performance by a North American side in 24 hours in this stadium that warranted more than it got. World Cup organisers will be patting themselves on the back for a weekend that offered far more drama than the world rankings suggested it should. Fans flocked in their stars and stripes, tartan and tam-o’shanters and were not disappointed.

That the USA began as well as they did helped. Going through the phases and recycling well they earned the first points with the Dublin-born fly-half AJ MacGinty slotting a straightforward penalty. Stuart Hogg soon responded by booming a penalty over from just inside the USA half.

Scotland made nine changes from the side that beat Japan, including three in the backs, but those selected were full of early adventure – a reverse pass from Henry Pyrgos went to ground yet it demonstrated the ambition that three wins in their last four matches has brought.

Grant Gilchrist’s withdrawal on 20 minutes with a leg injury was an unwelcome setback however – as was the try that USA fashioned after some indiscipline from Scotland at the breakdown. Winning the lineout in the Scotland 22 the USA bashed their way to the line too easily for Cotter’s liking and the tighthead prop Titi Lamositele barrelled over. MacGinty converted for a 10-6 lead that their enterprise deserved.

They might have another when the outside-centre Seamus Kelly straightened and broke the line but he could not get the offload away and Scotland scrambled, albeit from an offside position, if not in the eyes of the referee Chris Pollock.

Hogg then took matters into his own hands. He danced down the left – his change of direction such a lethal weapon and Tim Visser was a certainty to score, if he had caught the ball. The USA were riding their luck but their abrasive forwards and hard hitting was earning it.

The USA had found parity at the scrum and Scotland were rattled. Hayden Smith knocked on from a promising position but Pollock was playing advantage and MacGinty slotted another penalty – 13-6 to the USA and the shock was on, for approximately 80 more seconds. After the restart Pyrgos fizzed a pass wide to create the overlap and this time Visser held on. By that stage reinforcements were already on in the same of the props Willem Nel and Alasdair Dickinson but Russell missed the conversion and still the USA led by two. It did not take long for the fly-half to atone however, providing a delightful offload for Sean Maitland, running a shrewd inside line, who cruised over.

There were two points in it again when Samu Manoa, the superior talent in the Eagles’ ranks, puffed out his cheeks and won the penalty in front of the posts for MacGinty to slot but Scotland’s newcomers were beginning to make their presence felt and Nel bludgeoned through the USA’s tiring defence – Greig Laidlaw, another in action earlier that he might have thought he would be, converting for a nine-point cushion.

With disaster averted, Scotland turned their attentions to a fourth try. Camped in the USA 22 they were awarded a penalty and kicked for the corner. The score they were after duly arrived, a carbon copy of Maitland’s but finished off by Laidlaw. The USA came again, determined for another score but with the tryline beckoning, the replacement prop Olive Kilifi fumbled before Duncan Weir, Scotland’s replacement fly-half, added a fifth try late on, again forcing his way over from close range. The Eagles are getting there but it will be a while before they are in full flight.