Wales captain: ‘Ireland the most difficult side to play against’ 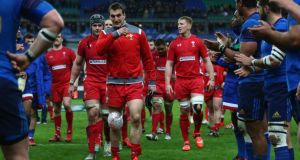 Sam Warburton the captain of Wales accepts the applause from the French players as he hobbles off after his side’s 20-13 victory - he expects to play against Ireland. Photograph: Michael Steele/Getty Images

Wales captain Sam Warburton is confident he will win his fitness race to face Ireland.

The openside flanker hobbled off with a knee injury in Wales’ 20-13 triumph at the Stade de France last weekend.

But instead of celebrating on the streets of Paris, Warburton was rushed into a recovery device to reduce the swelling around the problem area.

And he is hopeful of leading Wales out for a record 34th time in Ireland’s grand slam decider at the Millennium Stadium.

He said: “We have a device called the ‘Game Ready’ which is commonly used in professional sport.

“You fill it with lots of ice and water and you compress the injury. You put a knee strap around your knee and plug yourself in.

“I was in the gym on Tuesday doing some upper body stuff and having some extra treatment with the physios.

“But after the improvement of the initial 48 hours, I will be back in training on Thursday and Friday with the rest of the squad. So, I am optimistic I will be fit.”

Defending Six Nations champions Ireland are chasing a third straight win in Cardiff when they descend on the Welsh capital on Saturday, March 13th.

Wales management are expecting outside-half Dan Biggar to make a swift recovery from a hip injury, but reserve prop Paul James is out of the remainder of the championship with a fractured thumb.

Ireland have injury concerns of their own, with Sean O’Brien, Jared Payne and Jonathan Sexton all nursing injuries after the win over England.

But Warburton says it will be a tall task to stop Ireland making it 11 wins in-a-row, no matter what side arrives in the Welsh capital.

“If there’s one team in the Six Nations who have caused us the most trouble in the past four or five years, it’s probably Ireland,” warned Warburton.

“The games against them are never won by more than a score, they’re always tight.

“Away from home we struggled last time, they put in a good performance, then we had a bad performance two years ago.

“I’ve probably found Ireland the most difficult side to play against. So, if we were to win that game it would be one of the biggest victories we’ve had in the last few years.

“They are the favourites, and they do deserve that tag because they’ve won 10 games in a row and have played exceptionally well against good opposition.”