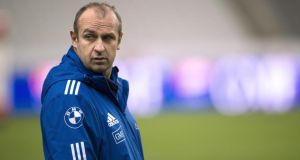 France’s coach Philippe Saint Andre at yesterday’s captain’s run at the Stade de France in Saint-Denis near Paris ahead of their match against New Zealand.

Stuart Lancaster and the rest of the team building Fortress Twickenham will look to Paris this evening for a proper understanding of the task that lies ahead. In fact, once this afternoon’s formalities are completed in south-west London it would be understandable if England’s head coach excused himself from any post-Argentina celebrations and began work immediately.

Arrive in London
Tomorrow the All Blacks arrive in London hoping to complete the penultimate leg in their perfect year. Since slipping up at Twickenham last autumn, New Zealand have won all 11 of their games this year, including three against France in June, and it is hard to see this encounter in Saint-Denis being any different.

Against a French side that had their poorest season since professional rugby began, the All Blacks coach, Steve Hansen, has picked the most experienced Test team to take the field, with 853 caps spread among the starting XV and another 112 on the bench.

Against that, Philippe Saint-Andre is trying his ninth half-back partnership since last year’s Six Nations and there was little surprise when the France coach suggested his side faced a tough task. “We have no intention of being just sparring partners. We are determined to show we can play with them at their level, even defeat them,” he said before underlining New Zealand’s remarkable record.

“What impresses me most is the number of wins – 28 – with only one draw and one defeat in 30 games,” said Saint-Andre, whose own record since taking over after the 2011 World Cup shows only seven wins from 18 outings, three of the nine defeats coming in June when the All Blacks amassed 77 points – including 30 unanswered in the second Test – while France scored only a single try.

No wonder Saint-Andre has been laying particular emphasis on defence, the industrious Biarritz flanker Wenceslas Lauret returning after missing the horrors of the summer.

Made few changes
France have made few changes but do go for the relatively inexperienced Remi Tales at outhalf. Tales made his debut in the 30-0 drubbing, coming off the bench for 16 minutes before starting in the third Test.

After eight seasons bumping around the lower divisions, his elevation came after a move to Castres, the current French champions but not a side noted for a romantic game

The man from Mont-de-Marsan is paired with Morgan Parra, reprieved for the autumn after a ban for punching was cut in half.

The Clermont Auvergne scrumhalf got in ahead of the form number nine Jean-Marc Doussain of Toulouse, who drops to the bench, while the impressive Montpellier pairing of François Trinh-Duc and Jonathan Pélissié remain in the cold.
Guardian Service