RWC #16: France hit back at the critics to dump out All Blacks 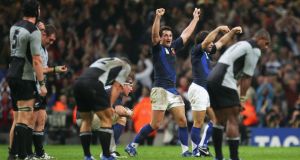 Yannick Jauzion of France celebrates as the final whistle signals his team’s victory in the Quarter Final of the Rugby World Cup 2007 match between New Zealand and France at the Millennium Stadium, Cardiff. Photo: Laurence Griffiths/Getty Images

Having being beaten France home and away over the last two years it seems like Ireland have finally managed to shake the Gallic hoodoo which saw then lose 11 out of 12 games against the French between 2003 and 2011 and lose 15 in a row between 1986 and 1999.

But while playing France might not be the daunting prospect it once was they are far from ideal Pool D opponents for Joe Schmidt’s side. And this is mainly because Les Bleus, even when they are in total disarray, are always capable of delivering a performance good enough to beat any side in the world.

Indeed, they got to the World Cup final in 2011 despite the squad being in quite open revolt against coach Marc Lievremont. In 1987 they stunned Australia to reach the final, in 1999 they did the same again, this time against the All Blacks.

In 2007 France were tournament hosts but were on the ropes having lost to Argentina in the opening game. They made the quarter-finals comfortably enough but were faced with a last eight tie against New Zealand in Cardiff.

Like in 1999, nobody gave France a sniff of beating the mighty All Blacks.

And like in 1999, the first half followed the script as a Luke McAlister try and points from Dan Carter gave the All Blacks a 13-3 lead at the break.

But at the start of the second half McAlister was sinbinned for taking out Yannick Jauzion off the ball with the try line beckoning. France clicked into gear, Thierry Dusautoir going over in the right corner.

New Zealand punched back with Rodney So’oialo sliding under the posts, but then Bernard Laporte brought the mercurial Frederic Michalak on.

It was Michalak who made the telling break from inside his own half before checking his run and waiting; waiting for the perfect ball to Jauzion who crossed the line.

It was a remarkable defensive effort from France, the blue line making more than 200 tackles, 30 of those by the imperious Dusautoir.

Once again, France had stuck two fingers up to the critics. Never write them off.