They said what? Ireland’s 2018 Grand Slam in their own words 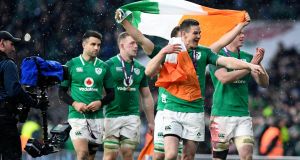 The Stones on him

Johnny Sexton’s last minute drop goal - from just inside the French half - to win in Paris in the first round set Ireland on their way in a historic Six Nations campaign. Rob Kearney’s reaction summed it up: “To build that amount of phases, to keep the ball - the conditions are awful - and then the stones on Johnny at the end was incredible.

“I thought it was a little short. It went in slow motion and it just crept over.

“We knew it was the last play. He ran off celebrating and we all went along. It was unbelievably special.”

And if it wasn’t for Sexton, as Ronan O’Gara explained on TV3, “Everyone would be getting up depressed tomorrow morning. Instead, everything is beautiful and all is possible again.”

Jordan Larmour made his eagerly anticipated debut in the win over Italy, and he wasn’t overly fazed. “Wasn’t that nervous. When I was about to go on I got a bit nervous but it was a special feeling. It’s been a dream of mine to play for Ireland so hopefully I get a few more opportunities to do it.” We suspect he will.

Not a bad start

Following the third round win over Wales, Ireland’s try-scoring machine Jacob Stockdale was equally humble in his assessment of his start to life in international rugby.

“My goal and plan was to play Six Nations when I was 23,” he explained. “That got accelerated with Simon Zebo going to France. I’m pretty happy with how I’m taking my opportunities.

“It’s not a bad start to my international career. Like I’ve been saying, I think the ball just keeps popping up in the right areas. I’m getting the rewards for that.”

Ireland’s man of the match against Wales was Chris Farrell, in for the injured Robbie Henshaw. Afterwards he veered from the script by revealing that the Grand Slam was on the team’s mind. Do ye believe ye can win it? “Absolutely. Of course there’s a belief. We believe.”

However, his tournament was subsequently ended by a training ground injury - one which wasn’t as bad as initially feared. And then it was.

“He just got his foot caught and fell and then got a bit of a fright,” was Joe Schmidt’s initial media report. “He jogged back out to the huddle - he was described as Lazarus by the players. He certainly was jogging around. He says he is absolutely fine. We don’t suspect that there’s any issue there.”

Meanwhile, Wales head coach Warren Gatland was asked how he felt the match between England and Ireland would pan out - “I don’t really care.”

Garry Ringrose came in for Farrell for the Scotland game came. Only just back from injury himself, he stepped up to the plate for the penultimate match of the Championship. After the win he was asked about replicating the 2009 Grand Slam?

“I was in second year in school. I think I watched it with my family. It would be amazing to be part of something like that but there is no point getting too distracted by that.”

Ever been to Twickenham?

Following France’s win over England later that day, Schmidt’s team were crowned as Six Nations champions. With a game to spare, how did that feel?

“It’s a little bit surreal,” Schmidt explained. “We’ve never won it (at home), certainly not in my five years with the team . . . the other two times we’ve won it away from home so it’s nice to have won it at home today. At the same time there is still another round to go.

“We’re just going to be reasonably calm about it and go again next week.”

Never mind the Grand Slam, in the build up to the final game against England, Ireland’s outhalf reminded us that he hadn’t yet won a Triple Crown. Despite three championships in five years.

“I remember playing Scotland in Croke Park for a Triple Crown in 2010 and almost taking it for granted because I thought I’d have plenty more opportunities like this,” said Sexton.

“I still haven’t won a Triple Crown. You’ve got to take these opportunities with both hands when they come.”

The big talking point ahead of the Anglo-Irish clash however came via English head coach Eddie Jones. “We’ve played 23 Tests and we’ve only lost one Test to the scummy Irish,” he told an audience during a speech last year, with the footage emerging this week. “I’m still dirty about that game, but we’ll get that back, don’t worry. We’ve got them next year at home so don’t worry, we’ll get that back.”

And as for his opinion of Wales?

“Wales. Who knows Wales? Are there any Welsh people here? So it’s this little shit place that has got three million people. Three million!”

Ireland’s number 10, Sexton, summed up the mentality of his team as they dominated England in Twickenham to seal the Grand Slam.

“I don’t need to come off,” he told referee Angus Gardner on 28 minutes as he wiped the blood off his face. The medics eventually dragged him off.

Following the win, TV3’s Sineád Kissane spoke to an emotional Schmidt. “The earthiness of them. We had Christy Moore in on Monday and he was fantastic. And he sang Ordinary Man at one stage. They are ordinary men who are an extraordinary team who delivered exceptional deeds.”

Formula One confirms rescheduled European calendar 12:48
Gerry Thornley: Stoppage could tip balance in favour of big money teams 06:30
Increase in membership a plus for adapting golf clubs 06:00
FAI council member raises concerns about governance of organisation 06:00
Fitzgerald says inter-county game should resume before club fare 01:03
Here is your handy guide to sport on television this week