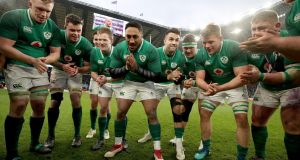 That’s the headline on the front page of today’s Sunday Times sports section after England manager Eddie Jones was forced to eat humble pie when Ireland beat England to claim a Grand Slam at Twickenham.

After Saturday’s win there is no shortage of opinions and analysis to wade through.

This is an Ireland team for the ages who can have a real crack at stealing New Zealand’s World Cup crown next year. Now all we have to do is keep our expectations in check.

“Ireland were excellent, the best team in the tournament by a distance. They are the best-coached side in Europe, with Joe Schmidt and Andy Farrell missing nothing, and they have the best strength in depth, making light of big injury absences.

“They are the most consistent in terms of selection, the calmest under pressure and probably the fittest side too. The Irish certainly look the freshest and most rested, with strong central control by the IRFU working brilliantly for the national team.

“Congratulations to all concerned — Saturday was historic and impressive and all on St Patrick’s Day. Life does not get much better and they are now poised to mount a massive challenge to New Zealand and all comers at next year’s World Cup.”

That summation comes from a man who knows how to win a World Cup, namely Clive Woodward in his Mail on Sunday column.

In The Guardian, Paul Rees praises the potentially world-beating axis of Conor Murray and Johnny Sexton.

“Ireland have become a compelling mix of experience and youth, a side in which no one, not even Jonathan Sexton or Conor Murray, is indispensable,” he writes.

Murray and Sexton have come in for a lot of praise after a campaign that proved their world class ability. While Sexton probably grabbed more of the spotlight with moments such as the Paris drop-goal a whole seven weeks ago, Murray did more than step up to the mark. Even a high pressure penalty on the hour mark at Twickenham didn’t faze the 28-year-old as he calmly slotted it between the posts to put Ireland out of sight.

In The Guardian, Gerard Meagher was full of praise for the authority shown by the scrumhalf.

“England’s fortress was not so much ransacked as razed to the ground and it owed much to Conor Murray’s peerless authority. Murray has a habit of rising to occasions, and here he was magnificent. Aaron Smith may be able to fire a quicker pass but there is no better all-round scrum-half in the world than Murray. Ben Youngs has been missed a great deal more than expected by England but Danny Care and Richard Wigglesworth are No 9s of repute and neither could hold a candle to Ireland’s scrum-half.”

Meanwhile, Lawrence Dallaglio says the Murray-Sexton combination is the best 9-10 partnership in the world and names Sexton as his player of the tournament in The Sunday Times.

But what is Stephen Jones saying? Well, The Sunday Times writer, who it’s fair to say has enjoyed taking a swipe or two at Ireland in the past, goes all out and says it – Ireland could win the World Cup.

“But all the while, Ireland seem to be improving, they are now ranked second in the world. They have a concrete-hard core, bearded growlers, fixers. Love them. That’s a Test pack. Johnny Sexton also now has somebody outside him. Once, it was a void out there, but now there is Garry Ringrose.

“They are one of the few teams New Zealand would respect and who could beat them — and we know that because they already have. The World Cup in Japan next year could see the Irish momentum become something history-making, astonishing, possibly even title-winning.”

Fear not though, there were a few barbs thrown in throughout, albeit in a veiled way. Jones pointed to the unity of Ireland among fans and players alike – “this is an intensity of purpose that other nations cannot match,” he writes..

“The unity of purpose is such that there are still people who believe Neil Back cost Munster a European final against Leicester by tipping the ball out of Peter Stringer’s hands at the put-in. It was a minor offence that made no difference, but as in the case of the hand of Thierry Henry, which apparently cost Ireland a World Cup winner’s medal, a whole nation is still fuming.”

But across the water the spotlight is now firmly on Eddie Jones. England lost and finished fifth out of six teams, Ireland had their day in the sun (snow, more like) but what happens next?

“From saviour to busted flush is a road countless coaches have taken, and Eddie Jones has a monumental task to stay off that path,” writes Paul Hayward in The Sunday Telegraph.

“However unfair it might be to characterise Jones as a leader with a best-before-date, his credibility is damaged. We might as well tell it straight.”

In The Guardian, Andy Bull points to the Twickenham supporters’ reaction to Jones after the game.

“After the game Jones was booed by the Twickenham crowd during his post-match interview.

“Our effort was outstanding. We played with character and we stuck at it,” Jones said, “and we just weren’t good enough.”

“The World Cup is 18 months away. His words were cold comfort on a chilling day.”

The knives are coming out for Jones, can he survive them?