Richie McCaw to overtake O‘Driscoll as most capped test player 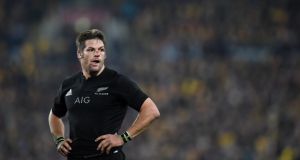 Richie McCaw will become the most capped player in test rugby in the Bledisloe Cup decider against Australia on Saturday, notching up yet another record in a career that has made him arguably the greatest player to ever wear the All Blacks jersey.

The 34-year-old openside flanker joined former Ireland captain Brian O‘Driscoll on 141 caps in the 27-19 loss to the Wallabies in Sydney last week.

That result has given the Wallabies the chance to reclaim the symbol of trans-Tasman supremacy on Saturday for the first time since they lost it in 2003, and threatens to overshadow McCaw‘s milestone.

McCaw, though, is probably quite happy about that.

As co-writer Greg McGee said in the 2012 biography “The Open Side“, McCaw is a private man living a very public life.

He is mindful of his role as All Blacks captain, a position considered the second-most scrutinised job in the rugby-mad country behind that of prime minister.

As such, his utterances when in camp rarely provoke controversy. He speaks of team first and downplays expectations.

McCaw exudes gravitas, or to use a uniquely New Zealand aphorism, he has “mana“. When he speaks, people listen. And his team mates follow him even when he, as he is wont to do on occasion, lays down the law according to Richie.

In “The Open Side“, McCaw said he had dreams of making the All Blacks from an early age.

Having been invited to the New Zealand under-19 trials, he was asked by his uncle John ‘Biggsy‘ McLay what his goals were.

The pair mapped out, on a paper napkin, a planned progression through provincial rugby into Super Rugby and then eventually to the All Blacks side.

“I couldn‘t bring myself to write the words Great All Black, so I wrote down G.A.B.,“ McCaw wrote, adding that he hung the scrap of paper at the back of a cupboard where no one else would see it.

Those teenage aspirations evolved as planned.

McCaw, who led New Zealand to their second World Cup title in 2011 on a broken foot, is now widely considered the greatest All Black, surpassing Colin Meads, and holds virtually every record and honour going in international rugby.

A three-time World Player of the Year, he was the first All Black to notch up 100 test caps, has the highest number of wins (124), most games as captain (105) and on Saturday he takes sole possession of the overall caps record from O‘Driscoll.

Meanwhile New Zealand will give Waisake Naholo every opportunity to make the World Cup squad after reports the winger, who broke his leg last month, has made swift progress in his recovery following alternative treatment in Fiji.

Naholo, who helped the Otago Highlanders land a first Super Rugby title earlier this year, was ruled out of the tournament in England after cracking his fibula during his test debut in the win over Argentina on July 17th.

All Blacks coach Steve Hansen said after the 39-18 win over the Pumas that Naholo faced three months on the sidelines but New Zealand media reported this week that Naholo was back doing light training already.

Hansen, who will name his 31-man squad on August 31st, was optimistic the 24-year-old could yet make it.

“I know of the treatment because I was over there not so long ago, before Waisake got injured, and they were talking about it,” Hansen was quoted as saying by New Zealand media on Thursday.

“And they swear by it. So who are we to boo-hoo alternative medicine. The Chinese have been doing it for years.

“If it works I’m a believer. I don’t care what he’s doing, if it’s making him think he’ll get better and he does get better then we’ve got one more person we can select.”

Cory Jane is another winger hoping to prove his fitness in time to make the World Cup cut.

Jane will play for Wellington in their provincial clash against Taranaki in New Plymouth on Saturday having missed out on the squad for the All Blacks’ return fixture against Australia in Auckland on the same day.

Hansen said it was the last chance for the 32-year-old, who injured his ankle representing the New Zealand Barbarians last month, to force his way into the squad but talked up the 53-times capped winger who has been routinely hit by injuries.

“It’s the only opportunity he’s going to get. He’s desperate, and just hasn’t had any luck the poor chap,” the former Wales coach said.

“He’s been a very, very good All Black and world class player. If he can reproduce that form then he makes us have to ask ourselves some tough questions.”