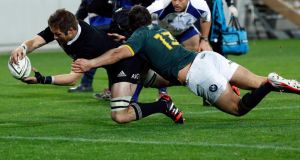 New Zealand captain Richie McCaw stretches past the tackle of South Africa’s Jan Serfontein to score a try in the second half of the Rugby Championship match at Westpac Stadium in Wellington. Photograph: Anthony Phelps/Reuters

Rugby Championship round-up: Captain Richie McCaw scored a second-half try to help the All Blacks maintain their five-year unbeaten record in New Zealand with a tense 14-10 victory over a combative Springboks side in Wellington on Saturday.

McCaw was the beneficiary of a pin-point cross-kick from Aaron Cruden that was hauled in by number eight Kieran Read who fed his skipper who dived over in the corner.

Cruden slotted two penalties for the home side while Beauden Barrett added another after he replaced Cruden late in the second half to give the home side 16 points at the top of the Rugby Championship table. South Africa are on 10.

“It was a hell of a battle out there tonight,” McCaw told reporters.

“I think the difference in the first half, we were on the back foot a little bit when they were getting the edge at the contact area and we were forced into poor decisions and poor kicks and poor handling.

“When you do that against a team like that you put yourself under pressure.

“The second half was better but no means perfect.”

Rookie South Africa outhalf Handre Pollard had been seen as a gamble by coach Heyneke Meyer, but demonstrated a mature cool head far beyond his 20 years and inexperience of just three previous Tests.

Pollard set up Cornal Hendricks’s first-half try with a brilliant inside pass, converted it and then slotted a long-range drop goal for the visitors who had the opportunity to win the match late on with several attacking lineouts but were thwarted.

“It’s a tough one to swallow,” said Springboks captain Jean de Villiers, who played his 100th Test match on Saturday. “It’s a loss to a quality side and very good team. We gave ourselves a chance but didn’t quite get there in the end.“

The All Blacks have been unbeaten in New Zealand for five years – a run of 36 successive Tests – last losing at home to South Africa in Hamilton on September 12th, 2009.

The hosts had the majority of the ball and territory but were thwarted by a superb Springboks defensive effort, led by number eight Duane Vermuelen and flanker Marcel Coetzee.

The All Blacks attempted to play at a high pace, forcing the Springboks to slow the game down by walking to lineouts and players to seek medical treatment at regular intervals.

The visitors’ defence, however, more than demonstrated that teams who want to play rugby will still need to do the basics first by committing players in close before going wide and to hang on to the ball when inside their opponent’s territory.

The All Blacks also kicked too often into open field rather than pinning the Springboks back in their own half, while their adherence to having lock Brodie Retallick feeding a prop to smash into the midfield defence became too predictable.

The Springboks led 7-6 at half-time after Hendricks scored a try from Pollard’s inside pass that the IRB junior player of the year converted.

The home side’s only reward was two penalties to Cruden in the first half, though he missed a third from long range after the half-time hooter had sounded.

McCaw then scored in the corner after a sustained build-up that culminated in Cruden making a pinpoint cross kick to Read, who took the ball and waited for McCaw to pop up outside him and dive over.

Pollard slotted a long-range drop goal in the 56th minute and the visitors then placed the All Blacks under immense pressure in the final 10 minutes but the home side managed to hold on to keep their unbeaten record at home alive.

“It was pretty desperate times,” McCaw added of the final 10 minutes. “It reveals the character of your team when you have to dig deep.

“They were also under pressure because they had to score so we just had to hold our nerve and keep tackling and the mistake came.”

Captain Michael Hooper grabbed a brace as Australia held off a late surge from Argentina to register a 32-25 victory at Robina Stadium, Gold Coast on Saturday.

The home side looked to be cruising to victory when they took a 29-17 lead after Peter Betham scored their third try on the hour mark but the Pumas charged back in the last 20 minutes to take the game down to the wire.

Centre Marcelo Bosch and fullback Joaquin Tuculet added to winger Manuel Montero’s first-half try but they were unable to get a fourth to give themselves a chance to square the scores.

Willie Mullins’ former star mare Laurina is retired 12:07
Sexton and Henshaw to miss Ireland’s clash with Georgia 10:04
Knockout All-Ireland could be the way forward; Gerry Thornley on Ireland’s lineout 07:27
Eoin Morgan: More than England’s captain, Dubliner is the team’s touchstone 06:00
Gerry Thornley: Ireland don’t want to box themselves into a corner 06:00
Crossword Get access to over 6,000 interactive crosswords