Paddy Jackson shows what he can do on international stage 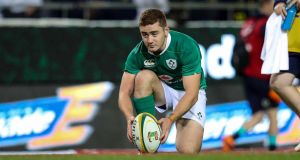 Last Saturday’s first Test assuredly marked a benchmark in the career of Paddy Jackson. Some 3½ years on from his surprise debut away to Scotland in the 2013 Six Nations, shortly after turning 21, his composed performance against the Springboks marked his coming of age as an international outhalf.

It wasn’t really that surprising. Les Kiss has invested more responsibility in Jackson as the primary tactician at Ulster and has been telling anyone who would listen that Jackson has had an exceptional year.

It’s a far cry from 2013, when he was pitched into the number ‘10’ jersey ahead of Ronan O’Gara at a time when Jackson was not even the first choice place-kicker at Ulster and was troubled by a leg injury.

After the 12-8 defeat to the Scots and a draw at home to France, the nadir was that 22-15 defeat to Italy in Rome when his confidence almost visibly drained and he retreated further behind the gain line. Between then and now, Jackson had only started the November 2013 win over Samoa and the August friendly away to Wales.

So when his restart went out on the full or his pass was picked off by Pieter-Steph du Toit for an intercept try (the only two blemishes on a smooth display which also saw him make 13 tackles) his response was to nail a key drop goal when Ireland were reduced to 13 players and the final penalty which sealed a famous 26-20 win.

“What he did within the game, he didn’t compound errors,” said the team’s skills and kicking coach Richie Murphy yesterday at the squad’s base in Johannesburg.

“He’s shown good signs of maturity over the last 12 months. His game has been improving through that period. He works really hard on his game, he’s becoming a leader in this environment and he’s also very much a leader in the Ulster environment. I think he’s just coming of age, he’s 24 now.”

Murphy said it was “hard for me to talk about what happened before. I can only talk about the environment since I’ve known him. Even when he wasn’t getting picked, he was a fantastic guy to deal work, always worked really hard, just trying to get better. He would have spent a lot of time with Johnny and would have learnt quite a bit from him. Not much more I can say; he’s been great.”

Murphy took particular pleasure in Jackson’s drop goal, as Jackson had sought Murphy’s help in improving this part of his game during the World Cup. They devised a regular end-of-training routine, two drop goals followed in his first two matches back with Ulster, and Saturday’s was his fourth of the season.

“Look, I’d have full confidence in Paddy in relation to his goal-kicking. He’s got a really simple routine and a really clear idea of what he’s trying to do, which means it’s quite easy for him to deliver it and he did that for us at the weekend.”

Jackson’s Ulster team-mate Jared Payne said: “I think Jacko’s going to be a cracking flyhalf. He’s got everything you need, he’s gutsy, he’s fit, he’s an awesome defender, he’s just got everything and he’s still really young, you’ve got to remember.”

Murphy also confirmed that although the Irish management would be of a mind to appeal CJ Stander’s one-week suspension following last Saturday’s red card, the drawn-out process made this unlikely, especially as they had still to receive the written report from the judiciary officer, Australian Terry Willis, by lunchtime yesterday.