Russia head for Rio after impressive performances at UCD 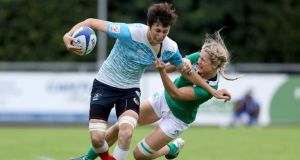 The Olympic aspirations of the Ireland Women’s Sevens team came to an end on Sunday as they claimed a third-place finish at the Women’s Global Sevens Qualification Tournament at UCD.

The Lucy Mulhall-led Irish recorded a 17-5 triumph over Kazakhstan in the Bronze Match in the penultimate encounter of the two-day rugby festival, but with just one team from the 16 in competition progressing to Rio, it wasn’t to be for Anthony Eddy’s charges.

There was some solace for Ireland on the day, though, with third spot ensuring that they will be in next season’s World Series.

The hosts had emerged from Pool C on Saturday with minimal fuss, and with Alison Miller and Railway Union’s Amee Leigh Murphy-Crowe in fine form, they comfortably booked their place in the Championship quarter-final on Sunday morning with victories over Trinidad & Tobago, Portugal and China.

They faced Pool C runners-up Tunisia in the last eight, where five-pointers from Alison Miller (two), skipper Mulhall, Ashleigh Baxter, Nicole Cronin and Stacey Flood helped them towards a 38-0 success.

This brought them head-to-head in the semi-final with the hotly-fancied Russian outfit, who in addition to scoring 198 points in their four previous fixtures, had also failed to concede a single point to their opponents.

Their line was finally breached by Shannon star Aoife Doyle in the opening half of their game with Ireland, but thanks to tries from Iulia Guzeva and Ekaterina Kazakova, they developed a 12-5 interval period.

Indeed, another score from Elena Zdrokova after the restart left Ireland with a mountain to climb, and even though Miller dived over for her seventh try of the competition, it was Russia who progressed to the Championship decider with Spain for a place in the Rio Olympics – which was eventually sealed by the Spanish on a scoreline of 19-12.