Oliver Jager: From the SCT to rubbing shoulders with Kieran Read 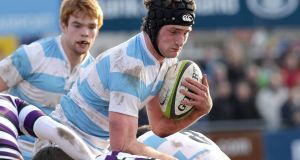 Oliver Jager in action for Blackrock College in the Leinster Senior Cup: Jager is pursuing a professional rugby career in New Zealand with the Canterbury Crusaders. Photograph: Morgan Treacy/Inpho

– family, friends and his schooldays in Blackrock College – to pursue an inclination towards a career in professional rugby.

He had played with Leinster and Ireland Schools, but there was no academy place in the pipeline, so undaunted, and showing remarkable maturity, he headed for Christchurch and a course called the international high performance unit at the Canterbury Crusaders.

Jager takes up the story. “You train with the Canterbury Academy. You do their specialist programme. You are basically part of the programme except you have to pay for it. I did that for a month, to see what professional rugby was like in New Zealand and just play a bit of rugby somewhere other than Ireland.

“After a month, I thought I’d done alright, but they asked me to come back and play a whole season.” He’d travelled to New Zealand with an impressive rugby pedigree. He started playing in Naas RFC and after a year at Newbridge College moved to Blackrock, winning JCT and SCT medals, the first as a flanker and the second as a tighthead prop – his preferred position and the one he plays today.

A significant setback in New Zealand was to test his character off the pitch. “I was pretty unfortunate because I ended up rupturing my ACL in April, 2014. I was out for a year. It was pretty difficult . . . but they took really good care of me, made sure everything was good, from the surgery to the rehab.

“That happened about four or five games into the season. I was pretty down but just kept rehabbing away, working hard to get back, decided to stick there and finish off the course . . .

“I got a call saying that the academy manager wanted to see me, so I went in and had a meeting with him and from then on I got the offer of an academy place and haven’t left.”

His father Harm was a strength and conditioning coach at Blackrock for four years and represented the Dutch waterpolo team at the 1984 Olympics.

Both his parents now live in Abu Dhabi, while brother Lars, is a year out of school and his youngest sibling Rolf is in fifth year in Blackrock.

“I was on the squad for the first three matches in preseason against the Reds, Highlanders and Hurricanes, which was a brilliant experience. I’m in the running.”

He’s had a couple of casual conversations with Ireland scrum coach, Greg Feek, himself a Christchurch native, before Christmas. “I was told I have a chance but I am not expecting a lot of game time this year. I’m more working towards a good club season a good ITM [Cup] season and next year push on from there.

“Obviously because I have never played any rugby at a high level outside first 15 SCT in Ireland, the speed of the game is phenomenal. You have to be so fit to play here, but the main difference would be the skill levels.

“You see props chucking offloads, hitting team-mates with 20-metre passes on the run that you just wouldn’t see at home.”

At 20-years-old he has no plans to come home in the short term, but would one day love the wear the green jersey. “It’s an ambition because I grew up in Ireland. Ireland’s my home.”