Not a pretty win, but a psychological restoration for Ireland

They may not be back to fluent best, but there were a lot of positives in win over Scotland 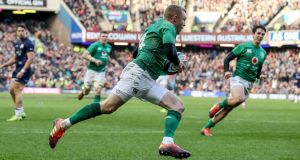 Any English or French club owners who campaign to have the Six Nations further compressed by a week, thereby ensuring three successive games at some juncture, are not even paying lip service to the notion of player welfare. The simple fact is that any such proposal would endanger the welfare of players.

As Gregor Townsend observed afterwards, the energy levels of both teams dropped in the second half due to the high level of the work in the tackles, carrying and contact area. “I don’t think you can keep that going for the 80 minutes,” he explained, after a final quarter which yielded just a penalty apiece and, in truth, never looked like producing much more.

Despite making five changes, Ireland looked more than a little tired by the end, all the more so after backing up last week’s bruiser against England. The thought of them having to play again next week would be bordering on cruelty, never mind affecting the welfare and health of the players.

Given Greig Laidlaw and Finn Russell will most probably have to play in the Top 14 next weekend, it also underlines the value of having control over the playing time and training load of a purely home-based squad.

Ireland will be grateful for the break, and the chance to regroup. Most helpfully of all, they do so with a psychologically restorative victory, for they also looked a little bruised mentally after that defeat by England.

Ireland may not, by Joe Schmidt’s own admission, be back to their fluent best, but, to put this win in perspective, it ended an eight-match winning run at Murrayfield in the Six Nations by the Scots. And that, lest we forget, included a 27-22 defeat to them here two years ago.

True, there remain concerns. For the second week running Ireland’s opponents employed quicker line speed in defence, resulting in Scotland being able to move the ball wide more easily. For the second game in succession too, one of the ripple effects was Ireland’s relatively slow ruck ball; and, in failing to add to their three tries in the final 23 minutes, they will rue not gaining a bonus point.

But there were positives too. Their set-pieces were excellent, the 100 per cent lineout return augmented by a couple of steals. Aside from calling the lineouts, Quinn Roux put in a solid shift at the breakdown (his 25 clear-outs easily the most by any player) and he put in a dozen tackles without missing any.

Ireland only conceded one line break, albeit the Scots missed Stuart Hogg’s cutting edge after an early shoulder injury. Jack Conan led the tackle count with 19, followed by Bundee Aki and Peter O’Mahony on 16.

Sean O’Brien also put in a good shift on his return, making 13 tackles and 15 carries in his 64 minutes

The defensive set through 25 phases toward the end of the first half was a huge effort, and, though not renowned for his defence, Jacob Stockdale is worthy of special mention. In addition to being the creator-in-chief of Conor Murray’s try with his trademark chip ahead, and finishing off the second try sharply, Stockdale made a try-saving tackle on Tommy Seymour and a try-saving read of a typically clever Finn Russell chip intended for Huw Jones.

Sean O’Brien also put in a good shift on his return, making 13 tackles and 15 carries in his 64 minutes. Ireland turned the screw in the second half without ever really putting Scotland away, and ,in addition to the hard carrying of Tadhg Furlong, James Ryan, Bundee Aki and co, Rob Kearney made a stunning comeback.

Imperious in the air, the fullback made three of Ireland’s six line breaks, albeit he ought to have passed for one of them. Most of all, Ireland won despite losing Johnny Sexton after 23 minutes, with Joey Carbery recovering from conceding an intercept try to deliver the game’s decisive play.

Murray’s first try may have been a little fortunate, but, after trucking the ball up, Ireland outflanked the Scots’ defence the first time they went wide through the passing of Keith Earls and Sexton.

The second try was a clinically executed strike move, the influential O’Mahony working a switch with Sexton who then put Stockdale through a cleverly manipulated hole in the Scottish ranks, and in taking the ball to the line against another late hit, this time by Allan Dell. In that instance, Scotland’s enthusiasm to clatter Sexton helped contribute to the ensuing gap in the blue line.

“I thought Johnny was excellent when he was on,” admitted Townsend. “They played a short passing game and he takes the ball right to the line. Lots of short balls to the centres and he’s obviously a threat when he takes the ball so close to the gainline.

“Joey played a bit deeper to have more of a running game himself, and it was a bit of bad luck for us to have two guys colliding in the tackle, but the strength of his running game to make that break turned out to be a massive part of the game.”

As for the hits on Sexton, Townsend maintained: “They all seemed legal to me. I think obviously the ref gets a chance to look at them back. A lot of the time it was man and ball and he’s putting other people into space.

“He’s such a good player and he showed his resilience today because he got a dead leg early in the game and kept on playing. But he’s someone who will definitely threaten the defensive line and give people chances on the ball.”

Schmidt believed that Carbery showed “more and more composure as the game went on,” adding: “He was a bit ruffled, especially after that intercept. But you know what? That is good growth. That is good opportunity to say, ‘I am under pressure here now, the team is under pressure, I’ve got to stay in the game and I’ve still got to make good decisions and I’ve still to boss the team well.’”

There’ll be grumbles, but all in all this was an important win. That it ultimately came about with Roux calling the lineouts and Carbery calling the shots made it even more beneficial in the long run.

Burnley hold on for a point to leave Arsenal stuck in 10th 14:43
Owen Doyle: Culture of ‘clip memory’ among modern referees not cutting it on the pitch 13:30
European Indoors: Sarah Lavin and Sean Tobin clock lifetime bests to advance 13:20
Lions tour will not take place in Australia this summer 11:39
England all in a spin once again as India seal the series 11:00
Crossword Get access to over 6,000 interactive crosswords