Matt Williams: Time for bowing at the altar of Joe Schmidt is over

Ireland are chasing an unprecedent hat-trick of Six Nations titles, but as Joe Schmidt's team enter this campaign without Paul O'Connell, can other senior players fill the void left by his absence? John O'Sullivan reports. Video: David Dunne 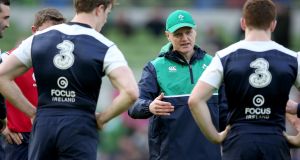 For players and coaches, losing games of international rugby brings nothing but bad vibes.

Most of the negativity of defeat is based around regret.

Missing a tackle, executing a poor lineout throw or tossing a bad pass will provide players with both guilt and humiliation.

When these errors occur on the world stage, the regret can live with you for a lifetime. Like dealing with a broken heart, you merely learn to live with it.

Of all these negative feelings, perhaps the worst is when you realise the opposition have out-thought you. When the other team has exposed your weaknesses for the world to see and your supposed strengths are snuffed out.

At the World Cup, the Six Nations teams were totally out-thought by the teams from the Rugby Championship.

Here are two dreaded facts. Since November 2014, against tier one nations, Ireland have only scored more than two tries on one occasion: the four-try victory over Scotland in the final match of the 2015 Six Nations championship.

Over that same period, Australia have scored more than two tries seven times. They scored a total of nine tries in the quarter-final and semi-final of the World Cup. They were the only team to defeat New Zealand in 2015 and, in doing so, scored three tries against the world champions.

The relationship between scoring tries and winning games is hardly a new phenomenon.

Despite the obvious evidence of the necessity for playing a running, attacking, ball-in-hand game, Ireland have persisted with a grinding, kick-for-position-then- win-a-penalty gameplan.

While that has delivered Six Nations titles, when deployed against the Southern Hemisphere teams it has had the same effect as taking a knife to a gun fight. You lose bad and bloody.

To put it bluntly, in the past 18 months Ireland have not played innovative rugby.

Whispers from the Ireland coaching staff suggest the possibility of us witnessing a more expansive gameplan.

Readers of this column will know I have been questioning the Irish attacking systems for more than a year.

Dear reader, please excuse my frustration at the statement from the coaching staff about the need for a more expansive game, but as the youth of today would say: “Like, no shit Sherlock!”

It is heartbreaking that current Australian schoolboy players do not care about what happens in the Six Nations.

Is it any wonder that the Six Nations is losing its international relevance, with the competition still refusing to adopt the bonus points for four tries? The local crowds still applaud indiscriminate kicking because no team is running the ball.

In the Southern Hemisphere, players who attempt drop goals are booed, even when it is successful.

Amidst all my morbid negativity about the lack of attack from Ireland, I do applaud the wonderful decision to award Rory Best the captaincy. Rory is a man of immense character.

I witnessed his leadership at first hand, when he was my captain in Ulster during the 2008-09 season.

When I walked in the door at Ravenhill in January 2008, Ulster were last in the then Magner’s League.

Every internal relationship in the organisation was at breaking point. Players were in fist fights at training, staff were being sacked and the on-field performances were unacceptable. It was in a very poor state.

In the following four years, Rory’s personal integrity, deep honesty and thoughtful approach were a major factor in Ulster turning the ship around and reaching a Heineken Cup final.

Rory has been the trusted general for both Brian O’Driscoll and Paul O’Connell. He is an outstanding leader by word and action. He unites players and gives soul to any team he plays in.

I know winning is paramount, but last year’s Six Nations Championship was fool’s gold. To me the score is less important than the style of play.

Ireland winning 9-3 may please those downing pints in the pubs in Sandymount after the match, but it will do nothing for Ireland’s development.

The embarrassing hero worship at the altar of Joe Schmidt must end. The Leinster days were great, but they are over. In the World Cup campaign there were major selection errors and in terms of attack it was a tactical train wreck.

Tomorrow we need to see if Schmidt can embrace the challenge of creating space at international level and give us all hope that the men in green can chase the creative thinking from the south.

Joe, like several other coaches working in the Six Nations, is from the south, but not of the south.

Now we need to see if Joe is capable of empowering his team to play high-quality, attacking international rugby.