Rugby league converts Williams, Folau and Burgess have been best exponents of skill 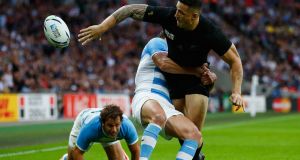 I don’t want to get all gushy so early in the tournament, but the signs of a return to running rugby at international level are looking good.

It’s been a good opening week. Teams are moving the ball and running wide more frequently than in recent years. In 2007 teams decided they could not risk attempting to run between the defenders, so they kicked over them.

While the concept of a “forward pass” from the boot of the outhalf for his wingers, as Johnny Sexton does so well, is still an option, the principle of moving the defenders around, by running the ball and creating space between the tacklers, is a flame that was almost extinguished.

As always in rugby, those dastardly Kiwis are setting the trend. Having their players shed several kilos so they are able to carry themselves into the last quarter of the game with greater pace, New Zealand returned to the running game years ago.

Their offloading is wonderful to behold. The attacking performances of Sonny Bill Williams are redolent of Jonah Lomu in 1995 – close to unstoppable.

If truth be told, offloading never really went away. It has simply not been coached correctly. Make no mistake, it can be coached and the uncomfortable fact is, offloading is not being coached in Ireland.

In the early 1990s the Irish team were a great off-loading team. Following the philosophy set down by the genius French coaches Pierre Villepreux and Jean-Claude Skrela, Willie Anderson and Stephen Aboud trailblazed these coaching concepts in Ireland, with great success.

In the process my two old mates ruffled more than few feathers, but the outcome was the Irish national team players and the national academy players could offload. In recent years the process of coaching these skills to our young talented players, has sadly been lost.

Willie and Stephens’ knowledge must be passed on to a new generation of young Irish coaches and players if Ireland are to once again play an offloading game.

Ireland will not offload at this World Cup because they have not been coached to do so from from an early age.

The question must be asked why the best offloaders of week one are the rugby league converts Sonny Bill Williams, Israel Folau and Sam Burgess. While this does not sit well with the purists, these great athletes have been coached about the footwork, mindset and decision-making required to pass after contact.

Skill acquisition is along-term project. If you want to play in the National Philharmonic Orchestra, you must play your scales every day.

Repetition is the mother of all learning.

Unless the Irish ball carriers can use footwork and leg drive to force their defender to make a low tackle, so freeing the attackers arms to look for a pass, the prospect of offloading from Ireland is non-existent. Iain Henderson alone is carrying the ball so effectively because he uses footwork before contact.

The inclusion of Sam Burgess at inside centre for England means offloading in the English midfield and doubt in the Welsh minds. Despite being despised by the English media because he is a “horrid league convert”, Burgess is highly skilled with the ball and a devastating tackler.

Stuart Lancaster has a very limited vision of how his team could attack. If Lancaster had selected George Ford and not retreated to the defensively minded, Owen Farrell, England should have easily defeated a much depleted Wales. Instead, Lancaster has invited Wales into a battle of attrition. George Ford has the ability to take the ball to the line, draw the defenders, then pass. If Burgess was on the end of one these passes he could devastate Wales. Farrell is solid, but lacks Ford’s vision.

Lancaster’s mantra has changed from, “let’s win the World Cup” to “let’s not lose to Wales”. The pressure of being the host country may be affecting Lancaster and his selection. The main beneficiaries of this selection will be Wales and their pool rivals Australia.

Wales’s best player recently has been Justin Tipuric. I am amazed he finds himself on the Welsh bench. Gatland has gone for his default back row of Warburton, Faletau and Lydiate. I could not believe Wales did not follow Australia’s very effective combination of Hooper and Pocock and select Tipuric as the genuine destructive open side, with Warburton at number eight.

A flying Tipuric, from the scrum and at the tale of the lineout, would have forced Farrell even deeper into the pocket and stymie any English go-forward. Wales will also miss his destructive tackling.

In a match between two poorly selected teams, the players who are brave enough to overcome the enormity of the pressure and attack with flair, patience and control will seize the day. If Lancaster had selected Ford it would have been England. With Farrell, Wales have unexpectedly stepped into the frame with a real chance.

The Wallabies are loving it.

Mako Vunipola to miss Ireland game for family reasons 12:30
Man City’s Abu Dhabi owners not the sort to back down over ban 10:51
Pints and sports events; England ready to show their best 07:30
Frank Lampard says Harry Maguire should have been sent off 06:36
Willie Mullins prefers to ‘keep it simple’ and run Benie in Mares Hurdle 06:00
Here is your handy guide to sport on television this week