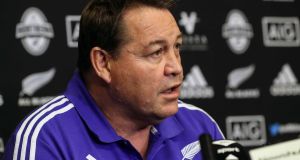 Head coach Steve Hansen has been envolved with the New Zealand management team for for over 10 years. Photograph: Billy Stickland/Inpho.

When you face the national rugby team of New Zealand, you truly take on the entire Kiwi nation. It does not matter where you play them. Be it at their Auckland spiritual home of Eden Park, or the Olympic Stadium in Sydney. Even the cold air of Soldier Field in Chicago will have little impact, because the stadium is irrelevant to the New Zealanders’ performance.

The New Zealanders are the dominant team in world rugby for one exceptional reason. They are the leaders in simplifying the complex game of rugby. Like all true champions, they make the difficult look easy. Each April I go to “the land of the long white cloud” for a week of rugby emersion, where I do a small amount of coaching and a lot of listening.

Each year I return home astonished at the level of leadership and unity behind their national team from the rugby community. At the core of their success is superior thinking and planning.

While other countries have complicated attacking systems, the Kiwis split their forwards across the field in a two-four-two formation. It is not a new system. France played this exact system under coach Bernard Laporte at the 2003 World Cup.

The sports scientists have taken five kilos of body mass from the national tight five players so they are more mobile. The coaches have set the frontrowers the Key Performance Indicator of making 20 per cent of the team’s tackles. The Kiwis understand that the basic requirement of learning skills is having great coaches who know how to teach. So they hold onto their great educators. The national coach Steve Hansen and assistant Wayne Smith have been in the national management team for more than a decade.

When the Scottish Rugby Union refused to recontract Mick Byrne, the former Australian Rules player and wonderful skills coach, who I employed at the SRU, the New Zealand Rugby Union swooped. (Don’t start me on the SRU.) Mick spent the next decade working on every skill, including passing catching and kicking with players at every province in all ages. He up skilled other coaches and mentored all time greats like Dan Carter.

Another unique aspect to New Zealand’s High Performance Unit’s success is that the skills, thinking and processes that drive all of New Zealand rugby come from the national team coaches.

New Zealand rugby also recognised that successful team cultures can be created. The New Zealand-born, former Munster centre, Jason Holland, who is now living back in land of birth, was a skills coach with the Canterbury Crusaders in 2015. He told me that the Crusaders spent almost as much time working on team culture as they spent at on field training sessions.

That is an amazing amount of time on non-rugby specific training. If you want a powerful culture, you have to spend time and energy developing it. It is not rocket science, but it is a science beyond other national rugby organisations.

Attending a New Zealand training session is an outstanding experience. The genius is in the simplicity of what is being coached. There was nothing I would not coach to a good team of 15-year-olds. A technically simple plan executed with great accuracy, brilliant skills and buckets of enthusiasm.

The New Zealand system is a machine producing men and teams of such outstanding quality that the rest of the world has been left in their wake.

A few days ago the Australians fought with great courage against the “men in black” at Eden Park. The Wallabies were angry, aggressive, well organised and disciplined. The general consensus in Australia is that the team gave their all. They lost 37-10.

Counter intuitively, the starting point for the rest of the world and Ireland is to not copy the New Zealanders in every aspect. While Argentina have made significant progress playing like “El Kiwis”, it is only short-term gain. At its core imitation is flattering, but the Kiwis will always remain more than one step ahead of any imitators.

The starting point is to have great respect for the New Zealanders, but never get down on bended knee and worship at the alter of “the cult of the black jersey”.

They are to be respected, but they are also human and beatable. The hard part is you have to be better than them to win. At Soldier Field in Chicago, the men in green will have a New Zealand problem with no Irish solution at hand, but then again, neither has anyone else on the planet.

Copenhagen strike late to break Celtic hearts 22:11
Ighalo and Fernandes net as Man United cruise past Brugge 22:09
Cork desperately hoping to get off the mark against Finn Harps 20:52
Matt Doherty nets as Wolves stroll past Espanyol into last 16 20:38
Cycling: Irish pursuit team finish eighth in world championships 20:36
Here is your handy guide to sport on television this week