Matt Williams: Ireland have a rare and beautiful opportunity 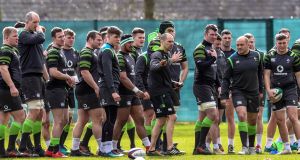 The Ireland squad during training at Carton House, Co Kildare, ahead of their showdown with England. Photograph: Billy Stickland/Inpho

When I was the coach of Scotland I always held my meetings at Murrayfield, in the room named after Arthur “Johnnie” Wallace.

Johnnie was captain of the famous 1927 Waratahs who toured England, Scotland, Wales, Ireland, France and Canada. He was a future Wallaby coach, a Rhodes Scholar and part of the famous Oxford University backline that played for Scotland in four Five Nations Championships from 1922.

A boy from the small farming town of Macksville on the New South Wales mid-north coast, he is the only Wallaby and Waratah who has won a Grand Slam.

The concept of a Grand Slam started in 1908, when France joined the competition to make it the Five Nations. Before this, to go undefeated in the Four Nations was to win the Triple Crown.

From 1931 to 1940 France were booted out of the competition for allegedly paying players and offending the strict amateur morals of the time. (Perish the thought of paying a player.)

The second World War then stopped play. (The English claim they won that one as well, which is hard to argue with.)

In the 94 seasons that there has been a Grand Slam available to win, only 38 teams have been able to scale that high mountain and become Grand Slam Champions.

The opportunity to win a Grand Slam may only be on a solitary day in a player’s life.

For this Irish rugby team, this St Patrick’s Day will never return.

For Ireland to be in the position to compete for a Grand Slam, there have been many “what if” moments along the journey.

What if, on the very last play of the game against Wales the pass that Jacob Stockdale intercepted, was 20cm higher and reached the Welsh attacker’s hands? Would he have scored and Wales won?

What if the Scots had taken the three opportunities they created and successfully passed to the unmarked man next to them and scored?

These were passes you would expect a 12-year-old to make. Instead Peter Horne, the Scottish inside centre, put himself in the running to be the Irish man of the match with a perfect pass to Stockdale, for another of his record-breaking tries. Horne then passed into touch when he had a three-man overlap. His centre partner Huw Jones chimed in and missed passing to Stuart Hogg with only Sexton to beat, with the line wide open.

What if those three passes had hit their intended receivers?

What if Eddie Jones did not brag before England played Scotland, that he knew the future of attacking rugby and it was to send only one supporting player into the ruck with the ball carrier? What if Gregor Townsend did not hear this and did not plan defensive tactics to send three Scottish defenders into the ruck that completely destroyed the English game plan?

What if England actually attacked France for more than the last three minutes of their match in Paris?

What if Jones had not said, “We have played 23 Tests and we’ve only lost one to the scummy Irish.”

Like me, Jones was brought up in a tolerant and respectful Australian multicultural society. I am Irish-Australian. Australia is accepting and tolerant of all cultures and religions. Calling our Irish national rugby team “scummy” is not acceptable on any level.

I would remind Eddie of coaching rule number one. When talking to the media, never say anything to give information or motivation to your opponent. It seems Jones’s mouth has got him and his team into a lot of trouble in the Championship. Now there is a surprise.

I am sure his words have found their way inside the Irish team’s preparations.

What if Johnny Sexton, missed his Parisian drop goal?

Who would of thought so many actions could have aligned for Ireland’s cause?

But they did. That is my entire point. When you look at it in total, to get all of these situations and happening to go Ireland’s way is amazing.

The trouble with cliches is they are true. “The spent arrow, the spoken word and the missed opportunity.” You can never get them back.

It is a rare and beautiful opportunity for this Ireland team to travel to London on St Patrick’s Day and compete for a Grand Slam, against an ancient foe, whose coach has just called them scum.

To win the Grand Slam this Irish team will have to improve in every area. The strength of their wide defence and putting variety into their attack in the English 22 must get better.

They are more than capable of doing this.

Do it for yourselves. You have worked your entire rugby life for today’s 80 minutes of “crowded life”.

You see, back in 1926, the season after Johnnie Wallace won his Grand Slam . . . well, there wasn’t one. Johnnie had to pack up and go back to Australia. It was to be the only day in his glorious rugby life that the opportunity to win a Grand Slam was offered to him.

He stepped up and took his shot. His team defeated England in the last round of the Championship and won a Triple Crown and a Grand Slam.

Today I hope another Johnny does the same.