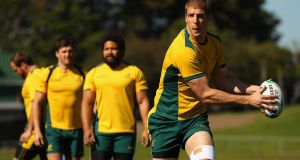 I’m not sure how to start this conversation. I’m supposed to talk to you about the excitement of Ireland playing France in a massive clash.

Six feet seven, gentlemanly and successful. Cambridge educated, with a life packed with success and the promise of more to come.

Now he is gone.

I sat in front of the TV news, with my head in my hands. I could not comprehend what I was hearing. “There were no suspicious circumstances.”

I don’t have any answers to the anguish and pain of mental health. I am as uneducated and confused as the next person. I will tell what I do understand and what I have witnessed first hand.

Regularly playing in colosseums, before 60,000 adoring fans, screaming their adulation at you, can really stuff up your head. But it’s not the crowds you love. You’re addicted to the pumping exhilaration of being a modern-day gladiator, with every atom of your being tingling with life.

In the precious hours before and during a big match, you crave the “juice”, that courses adrenaline through your veins. Nothing compares to the highs of those great wins. Nothing. Not sex, not alcohol, not drugs. Nothing. That is the beginning of the problem.

Then you have to start a new career. A “newbie” trainee at 30. It’s not like footballers, who earns millions, then never work again. In rugby, a few get paid well, but for most, its good money, but not enough for retirement.

So you fall into one of two camps. Those who can deal with the ending of their playing days and those who can’t. There is no way of predicting which camp you will fall into. It’s random.

What I do know is that every single professional player and coach has challenges at the end of their professional rugby days. Fortunately most cope successful, if not joyfully with the change.

I don’t know why some don’t.

Therein lies a problem. Most of the rugby guys I know are not good at deep introspection. We are trained to hide what others might perceive as a weakness. We hate the thought of weakness in ourselves. We have demanded strength from ourselves for years and in our own twisted, macho way, we have delivered it to our team and our community.

But I don’t really want to talk to you about that. I’m not very comfortable talking about my many weaknesses. So my secrets will stay with me. Right now there are things about myself I should write and tell you, but I can’t.

I will battle my demons my own way. It’s sort of worked for 57 years, so why change that survival mechanism now and open up about all my fears. The trouble is that outmoded, 20th century, way of masking problems, that I and lots of other men use, does not always work. These are the guys we have to support and help.

Maybe it’s because former athletes, admitting to personal problems, appear like they are out of control of their environment. Sportsmen like to be in command of their lives. Our daily timetable is almost militaristic in its ordered routine.

Once the season competition draw is made, you can predict what you will be doing on every day, of every week for the next 10 months. Holidays in June. Pre-season in July. Strength in the mornings. Skills on Tuesday . . . I control that session, that day, that week. Control. That’s our comfort zone.

Games are our stage. The religious theatre of the pre-game ritual. The strapping. The head phones. The socks, then the boots, then the warm-up, shirt, lastly the shorts. The “alter bell”, like tones of eight metal studs grinding on the concert floor. To “our tribe”, it is both comforting and reassuring. We belong.

Time runs down and tackles the fastest centre. Age out-jumps the greatest lineout leaper. Old props just fade away and sometimes, well sometimes, you just get sick of the small things.

For me it was leaving my kids for away games. Waiting in airports and lying in lonely hotel bedrooms, knowing each day I was away from their childhood was a day I would never get back. That started to grate. I came to despise the travel.

I have my own small demons and, as I said, I don’t have any answers in this conversation. What I am sure of is that it is a conversation that some of us need to have. If you are a former player and you are having issues that you find hard, please ask for help. That is not weakness. It is strength.

If you are a former team-mate of someone and you suspect that they are not coping, talk to them. Don’t quit on them. Be the friend you should be and support your mate to get help.

If you are the partner or the parent of a former player and you can see they are struggling, contact support groups and try your best to get help for the man you love.

As I said, I am useless in this space. I am not trained or equipped to give advice. All I know is that good men are dead who should be alive. We all have to try to stop this week’s tragedy becoming a vicious and recurring cycle.