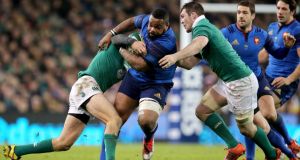 Jared Payne and Peter O’Mahony of Ireland with Mathieu Bastareaud of France: Ireland made no line breaks, scored no tries but still won the game at the Aviva Stadium last week. Photograph: Ryan Byrne/Inpho

On the wall in my grandfather’s house hung an ancient pendulum clock. It functioned because many intricate parts, some large and slow-moving, others tiny yet rapidly gyrating, acted in unison. The old clock remains greater than the sum of its parts. A piece of true teamwork.

The technology for that staggering piece of machinery was created at about the same time the very naughty William Webb Ellis broke every law of football and picked the ball up and ran with it.

What is never mentioned in rugby’s joyous recounting of its rebel birth – when Billy stuck two fingers up at the establishment – is that the very next act came from some spotty-faced rugby schoolboy, who lined up the future Rev Webb Ellis and slotted him in the guts with a driving shoulder tackle.

Thus commenced the never-ending swinging of the pendulum between attack and defence, which makes rugby a contest at every level.

Or more accurately which “should be” a contest at every level.

Over the years the pendulum of dominance between attack and defence has swung to and fro. The lawmakers step in when they consider that the pendulum is out of kilter, when the foundation of rugby, the contest, is being dominated by the negativity of defence or the positivity of attack.

Last week, Ireland made no line breaks and scored no tries but still won the game.

This can only happen when the law’s pendulum is out of balance and favours destructive, negative play at the expense of creative positive play. Teams are winning because the laws are rewarding negative play.

The choke tackle is from rugby league. It has come to the attention of world rugby through the excellent coaching of Les Kiss.

It is highly effective but it remains a bastardisation of the maul law that was never intended to be used to penalise a ball carrier who is on his feet. The maul law intends the attackers to determine a maul, not the defence.

At almost every ruck the defending team establish their defensive line in an offside position. The defenders are starting “offside” in front of the last man in the ruck’s feet. We are asking the one official on the field of play to adjudicate the tackler, then the ball carrier, then players entering the tackle area and then the ruck, as well as judging the defending players who are behind his back. It is not humanly possible for the referee to get it right.

The result is that, at the majority of rucks – and there are more than 100 in some games –the defensive lines are offside.

We do not need to change the law but we need to enforce the law. The IRB should follow rugby league and introduce a second on-field referee, whose sole role is to police the offside lines and keep defence on side.

Big, fit, determined, yet lowly skilled players can mount a world-class defence. Those same players may not be able to create even a mediocre attack because defence is very easy to coach and attack very hard. In a contest of muscle that aims to negate skill, physical size is paramount.

This trend has had another unintended consequence. Rugby prides itself on its inclusive community. We had tall, short, fast, skinny, strong and wide players (we don’t like calling props fat, as it hurts their feelings) – or at least that is what rugby used to be.

Rugby is now a game for giants, who can win space by crashing into other bodies rather than using skill. It is highly doubtful if Brian O’Driscoll and Gordon D’Arcy, two average-sized, yet highly skilled and gifted men, were playing school cup today that they would be selected for the Leinster Academy.

Then there is the scrum. In last week’s match at the Aviva Stadium, the first time the ball was passed out of the scrum to reach the attacking French centres was at 79 minutes and 42 seconds. Heartbreaking.

My grandfather’s old clock now hangs on my wall. Like rugby, it is getting close to its 200th birthday. With small adjustments to its pendulum, it still keeps good time.

The guardians of the game, the IRB, have the stewardship of rugby. Stewardship is not ownership. On their watch the game’s pendulum has swung badly out of kilter. Some simple changes will rebalance the pendulum and bring back the contest. All the pieces of rugby, big and small, can once again combine in unison.