Liam Toland: We shouldn’t get too excited for World Cup – France’s problems are fixable 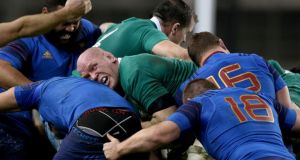 Paul O’Connell and his team-mates had the character and fitness levels to withstand the charge of the French bench in the second half. Photograph: Dan Sheridan/Inpho

The Great AK was right; ‘no amount of analytical physics can open a door’ but in the end energy, team spirit and tactical nous can close many a French door and as Simon Zebo and Seán O’Brien barrelled Rémi Lamerat across the far touchline, the match clock in the red, it was yet another step in managing the big guns. And they don’t come much bigger than this French team.

Defensively, Ireland limited France to one line break but surely the best tackle of the day – in fact the best of his career – was when Mike Ross managed to land his left hand on winger Teddy Thomas.

Mathieu Bastareaud stole a cracker on the deck after Conor Murray carried and before anyone knew it, the French were off. That they were deep in their own half made it all the more dangerous. As Rory Kockott circled passed to the flying Thomas the score was 6-3 to Ireland and the match had so many subplots.

The penalty count was 11 against Ireland; the Irish frontrow conceded seven (scrum and play), two of which were at scrums during this transitional period, which highlights the impact fresh legs make in the frontrow.

But they stayed on and they managed to contribute while the big 155kg man Uini Atonio made his first carry, which brought them right up to the Irish line, forcing a superb rip from Peter O’Mahony just as Pascal Papé was landing a cheap shot on Jamie Heaslip.

The battle at scrum time was again fascinating. The first Irish scrum brought the first penalty against Ireland. Three minutes later in the second Irish scrum, a rare thing of beauty occurred: a clean strike. It was so clean Heaslip missed it at the base, putting huge pressure on Conor Murray to survive. But why a thing of beauty? The modern scrum laws place huge pressure on the striking hooker as the opposition snap attack at the very moment the hooker lifts his leg. So we tend to witness scrumhalves spinning the ball so it essentially lands at the second row’s feet. This affords the put in team a full eight man against eight.

To give Rory Best a strike so clean, both Ross and Jake McGrath and their secondrows would have to combine world class technique with brutal strength for those seconds; hence a thing of beauty.

With control of the ball in the scrum in mind, I was fascinated to see Ireland’s reaction to the Best sin bin. The inevitable scrum arrived on 65 minutes and O’Brien went off for Sean Cronin. Arguably Ireland could have taken off a different backrower, but in any case Rob Henshaw arrived to add another position to his repertoire.

Surely the simplest thing to do was to shift O’Mahony to the blind side, where the Irish striking ball would require control. It’s a small matter but when you’re not scoring tries these margins are too serious to ignore.

The game opened with Ireland’s exit strategy entirely different from Rome. They were comfortable holding possession, shifting it along the line, seeking possible light in the blue defensive line.

Of course, the French stacking back field made finding green grass a tad challenging but for a guy with so little rugby in him Johnny Sexton’s kicking was immaculate – especially his restarts, which gave athletes such as Tommy Bowe and Jared Payne great regain opportunities.

All week the talk was of Sexton’s clash with Bastareaud, and boy did it occur. Ironically, the easiest thing for Sexton to accomplish were those tackles; which were not easy but less difficult than controlling tempo, tactical kicking and running a backline at this level in the white-hot Six Nations intensity requiring far greater levels of accuracy. The Irish lineout maul was equally accurate, in controlling pace and combating the French monster high on bulk but low on technique.

In fact, the game was 50 seconds old when Ireland eventually box kicked out of their 22. The recycle came to Thomas as first receiver; he had Payne to his front with Zebo the last defender. Outside Thomas were three French men; a four on two in space, manna from French heaven. He ignored a precious try-scoring opportunity and carried to Payne; Ireland regrouped and the chance was gone. Less than a minute in and France butcher a cracking seven pointer.

As Ireland exited the pitch high on emotion, France were ironically at their most unified, embracing in the classic end-of-match huddle. There they stood, as one, with their coach still in the stand miles from them. They have problems in many aspects but a word of warning, most of them are fixable. If they embrace the opportunity, then come the World Cup all bets are off. liamtoland@yahoo.com