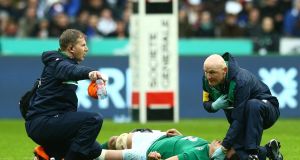 There is a template for defeating Joe Schmidt’s well-drilled, yet so clearly breakable, Ireland team.

Irish players seem more susceptible to concussions and injuries than other nations.

Maybe it’s the way they play. The Giovanni Trapattoni argument – that Ireland lack the skill-set to play in a more enterprising manner gets presented once again.

“He was up and walking about, feeling quite well,” said Devin Toner.

“I don’t think he remembers the incident so there’s maybe a little bit of a concussion. He did the HIA test and did quite well. We’ll just have to see how he goes the next couple of days. He didn’t want to be carried off so I think he’s not too bad.”

Those are the injuries we know about. Conor Murray was stunned after a collision with Rory Best. The Ireland scrumhalf was laid out, his eyes closed, but he got up, stumbling as he struggled to find his feet, before playing on without any noticeable treatment.

Tommy O’Donnell, who passed a Head Injury Assessment last weekend during the Wales game, was seen clutching his head after a collision. He played on to make a game leading 20 tackles in just 60 minutes.

But McCarthy should be a major concern. The 34-year-old lock has been treated for at least one other concussion in the past year.

In the 61st minute, as play moved on before Dr Jim McShane arrived at McCarthy’s side, he tried to get up. He could not. His left arm tilted awkwardly into the air, his head jilted upwards several times before returning to the turf.

Not many witnessed this upsetting sight because play had moved 50 metres away as France flooded into the Ireland’s 22.

When asked about the injuries, Schmidt said: “Jared Payne played on with I think a dead leg for about 30 minutes. I thought his performance was outstanding in the context that we didn’t really have anyone to come on at that stage in his position as Fergus McFadden was already on as a result of Dave Kearney’s [AC]injury.

“Johnny knows what he is going to get when he comes here and he was prepared for it, he was pretty knocked around at the end of the game.”

“Mike McCarthy certainly appeared to suffer concussion,” continued Schmidt. “He will now follow some protocols on the back of that.”

Schmidt was asked about the six day turnaround from playing Wales in Dublin to France in Paris.

“The worst thing about the six day turnaround this year – we had one two years ago between Scotland and Wales but they were both home games. I think that allows you look after your squad a bit more.

“We had to catch a flight. It might not sound like a big distance but it is about four and a half to five hours from Carton to get to our hotel here in Paris [on Thursday afternoon].

“That’s five hours when you are locked into seats and guys seize up a little, it is not ideal, on the back of a six day turnaround.

“The one thing we don’t want to be is making excuses. I think France came out in that second half and played really strongly. On the back of that we were starting to lose our legs a little bit. That’s unfortunate.”

1 Ken Early: Liverpool fans, Bamber Gascoigne and a close shave in Istanbul
2 The Offload: Philip Browne’s grave outlook should be taken seriously
3 As news gets better, can the pull of The Field be resisted?
4 Tiger Woods and Peyton Manning hold their nerve in $20m Covid-19 charity match
5 Could Disney World be the NBA’s knight in shining armour?
Real news has value SUBSCRIBE

Could Disney World be the NBA’s knight in shining armour? 12:42
Premier League must share wealth to ensure English football’s survival 10:54
All in the Game: Did Rory Delap’s long throws cause the 2008 financial crash? 10:00
The Offload: Philip Browne’s grave outlook should be taken seriously 10:00
Cricket ban on using saliva to shine ball will only be temporary 08:41
Here is your handy guide to sport on television this week