Lack of an attacking system continues to stymie Ireland’s ambition 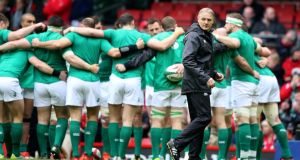 “Ireland could not cross the line against Wales, even with a maul. We needed referee Wayne Barnes for that. Ireland’s attack was impotent.” Photograph: Dan Sheridan/Inpho.

I have coped a bit of “stick” from lots of quarters because I dared to question the attacking system of “St Joseph of Donnybrook”. I have found Ireland very protective of St Joe. Joe Schmidt is a great guy and a great coach with an outstanding record. I admire the man. I am playing the ball and not the man. I am not criticising Joe as a man. I am pointing out the elephant in the Irish rugby room. That the attacking systems in the Irish team do not function.

We all witnessed that last week.

Now, we are led to believe that, with a splash of holy water, miraculously, an attacking system capable of running in several tries will spring forth in Edinburgh.

Ireland have crossed for only four tries this year. Ireland could not cross the line against Wales, even with a maul. We needed referee Wayne Barnes for that. Ireland’s attack was impotent.

Ireland are not running in tries because the actions required to run in tries, such as side stepping before you get to a defender, decoys running angles at the defender’s shoulders to try to create separation between the defenders, are not happening because there is no structure.

If Ireland can get that all together in a week they have a hope. I do not believe they can go from no structures to an excellent system in a week.

The thing that annoys me is that this has been the system since November but because Ireland were winning everyone was making excuses.

The criticism of Barnes has been “sour grapes” and did not reflect well on Irish rugby. Ireland had enough ball to win three games. Here is the fact that has not been talked about because we don’t seem to like looking at the truth.

Ireland refused shots at goal, then kicked for touch and lost lineouts five metres from the Welsh try line. That is unforgivable. To spurn points is wrong. To spurn points and stuff up your lineout is to self-destruct.

I am also detecting a touch of arrogance in some of the statements coming out of the Irish camp. Some of the talk this week has been disrespectful of the Scots. The theme is now Ireland have “the shackles off we will run in the tries with ease”. Does that mean the shackles were on in the previous matches?

Talk is cheap and this talk is disrespectful of Scotland.

Scotland have been playing solid, well-structured rugby, especially at Murrayfield. Scotland simply do not have the individual talent to make a successful international team. Vern Cotter is an excellent coach with a great vision for the game but the talent pool at his disposal is shallow. Believe me, I know.

To Cotter’s credit, Scotland have been very competitive and not lost by much at Murrayfield. The arrogance in the Irish commentary is saying publicly that it will be easy pickings in Edinburgh. This will not be lost on the Scots. I bet Vern has the cutting up on the wall on the change room at Murrayfield. “So boys, that is how little respect they have for us . . .” You get the picture. A coach’s delight.

It is time for Ireland to stop talking, engage the brain and get back some humility and act. Scotland are not going to lay down. Ireland will have to fight for every point. It will not be easy to amass a huge differential in Edinburgh.

The challenge for Ireland is to put an attacking system in place that can breakdown a gritty Scottish defence. It has been over a year since Ireland looked like having a good attacking system. In that time Ireland have relied on the boot of Johnny Sexton. Once that source of points stopped Ireland were rudderless.

I doubt Ireland will score the required points to win the championship. In the long term, maybe that’s a good thing. The pain of not winning the Six Nations may motivate the coaching staff to develop a running game. Without a world-class attacking system the pain of this weekend will be felt again in October during the RWC. Ireland will fail in the World Cup without a competent running game, just as they failed to gain a Grand Slam.

In March I said there would come a day when Ireland would need a solid attacking structure to win an important match. That day was against Wales. I did not know another very important day would follow so soon. Obviously, neither did the Irish coaches.