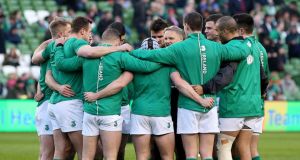 Ireland head coach Joe Schmidt talks to his team before the Six Nations game against France. The only change to the side that won that game is because of injury. Photograph: Dan Sheridan/Inpho

Joe Schmidt is expected to keep changes to a minimum when he announces the Ireland starting XV and replacements to face England at lunchtime today for Sunday’s pivotal Six Nations clash at the Aviva Stadium.

The only anticipated alteration to the starting XV against France has been forced upon the Ireland coach, with Jamie Heaslip sidelined for only the third Six Nations game in eight years, Jordi Murphy is expected to start.

Murphy was also Schmidt’s starting number eight for the opening win in Rome when Heaslip was sidelined due to a knee injury. With so many other backrowers injured (Robin Copeland, Chris Henry, Robbie Diack and pending his return for Leinster this weekend, Rhys Ruddock) the other options available involved moving either Seán O’Brien or Peter O’Mahony to number eight and bringing in either Iain Henderson or Tommy O’Donnell.

But this would necessitate further reshuffling as opposed to choosing Murphy as a direct replacement for Heaslip, with all the signs from the camp suggesting O’Donnell will have completed the post-concussion return to play protocols and be passed fit to be named amongst the replacements.

The argument for recalling Cian Healy this week was a little more compelling after his additional game time for Leinster last weekend and, as Leinster scrum coach Mark Caputo has pointed out, his proven record against Dan Cole. Against that, Ireland management might also be mindful of how Joe Marler imposed himself on Mike Ross in the back-to-back European Champions Cup games in December.

Whether Healy’s 37 minutes for Leinster against Zebre last Friday, on top of his 17 minute cameo against France, is sufficient game time to replace Jack McGrath, who has done little wrong, after being sidelined since September seems unlikely. Belief in Ross remains undimmed, as Simon Easterby clearly indicated on Wednesday, and all the more so after his two restorative outings to date.

The coaches will assuredly have looked at naming Luke Fitzgerald on the bench, after his return to fitness and form went up another notch with his try-scoring and potent running against Zebre, although Schmidt is a staunch admirer of Felix Jones and particularly in the way he gets to the pitch of the game from the bench.