Joe Schmidt to learn player availability over next 48 hours 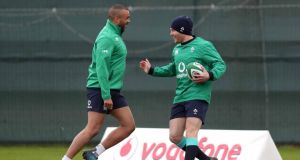 Munster duo Simon Zebo and Keith Earls are both in the mix to feature for Ireland against Australia on Saturday. Photograph: Inpho/Billy Stickland

The next 48-hours will determine the playing roster available to Ireland coach Joe Schmidt for Saturday’s test match against an unbeaten Australia at the Aviva stadium.

CJ Stander and Rob Kearney are following return-to-play protocols following concussive incidents in the 21-9 defeat to New Zealand, while Simon Zebo probably hasn’t finished counting the number of bumps and bruises, a painful legacy of the All Blacks game.

Ireland forwards’ coach Simon Easterby offered a medical update starting first with Stander and Kearney. “Yeah they are on track, they are following the return to play protocols and are covering off those (markers) as we would expect. We will know later in the week as they go through those protocols.”

Zebo did return to the pitch without taking a full part. Easterby explained: “Simon has managed training today (Tuesday) and got through some work, He, like some other players in the group, are being managed, to get them right for Thursday, when we can select the team based on who is available.”

Connacht secondrow Ultan Dillane and Keith Earls, neither of whom were considered for selection ahead of last weekend, due to injury niggles sustained against Canada, appear to have successfully rehabilitated the knocks.

“Keith has managed to train today (Tuesday). Ultan was carrying a bump from his performance against Canada so those guys are back on board. They will have been disappointed to miss out on the opportunity to play last weekend but it is obviously good to have some guys coming in who are a little bit fresher and ready to put their hands up for selection.

“The majority of players would still be feeling it. Player’s tend to carry little niggles throughout the season anyway, that’s always the case. In terms of the soreness from the game, I think it does take a few days these days to recover.

“And they all work incredibly hard to recover and put themselves in the best position to train early in the week. Some obviously will be feeling it a little more than others.

“First and foremost we want to try and get a performance and keep building some consistency. Yeah, we want to build depth; that probably goes back to the World Cup time when we didn’t quite have that depth in certain positions.

“Building that depth, whether that is selecting guys who haven’t been involved so far in this series or guys who missed out last week will be dependent on a few factors.

“It is important to get the balance right. We have lost a few players already after the weekend, we want to keep some consistency (in selection) but we always want to build some depth going into the Six Nations and this weekend might allow us to do that.”

Easterby smiled when asked whether it was fair to say that Munster captain Peter O’Mahony was keen to involved in the games against Michael Cheika’s Wallabies.

“There’s a few guys who’d want to put their hand up and if they get an opportunity they’d be chomping at the bit. Pete’s one of those guys. He’s another guy that when he’s on form, there’s not many better. We’re fortunate we’ve got a couple of those more experienced players coming back.

“But credit to the guys who have played over the last few weeks in the two tests against New Zealand, putting huge pressure on selection. That’s what you want in all positions, but in particular the backrow” (the selection) will be a difficult one.”

Mention of backrow matters invariably directed conversation towards that of the Australian breakaways. “A couple of really good quality fetchers in the team in David Pocock and Michael Hooper in particular,” Easterby continued.

“(Lopeti) Timani has come in in the middle of those two, not last weekend but against Wales. He ticks a lot of boxes for the way they want to play. He’s a good ball carrier, strong and aggressive. I think having the guys either side of him with their experience brings a good balance for them in the back row.

“They have other guys who can come in. Scott Vardy, Sean McMahon is fit again, so they’ve got plenty of depth in that back row. Although our backrow was really good on the weekend, they know it’s a massive challenge waiting for them. Whoever Australia decide to select, it’s going to be a tough encounter.”

The Ireland and Australian teams will be announced on Thursday.