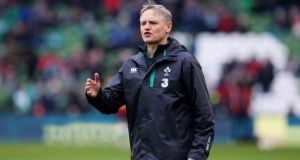 Joe Schmidt has cast off the attacking philosophy of his coaching “apprenticeship” and is adopting a pragmatic “forensic accounting” game plan. Photo: Alex Livesey/Getty

After the third round of the Six Nations match statistics can reveal the playing trends that power that championship.

I would remind you there are lies, damn lies, and statistics.

If you overemphasise statistics you can come down with the coaching disease known as, “paralysis by analysis”.

While last-placed Scotland have carried the ball 1, 237 metres, only just short of the leaders England with 1,381 metres.

The stat suggests ball-in-hand running rugby is not being rewarded.

That trend continues with the “offloading and line break” statistics.

Ireland are at the bottom of the table with only eight clean breaks and only12 offloads. It is no shock that in having scored only three tries Ireland have scored less tries than Scotland, Italy, Wales and England.

Yet, it is the scoreboard that matters and Ireland have scored 63 points, second only to England on 77.

The vast majority of Ireland’s points are from the boots of their excellent goal kickers.

A simple “P law” is in use by Ireland. Get Position, through kicking. Apply Pressure. Get Penalties. Accumulate Points. We used to call that “Munster Rugby”.

Many of those penalties are from scrums.

The true picture of the Irish and French scrums was that useful attacking ball came out of only two of the 11 scrums. Both were for France, and inside the last two minutes. I can only conclude that penalties from scrums now count as wins or losses.

By the Six Nations statisticians’ definition, you can win the scrum without the ball going in or coming out. Lies, damn lies . . .

Joe Schmidt has cast off the attacking philosophy of his coaching “apprenticeship” and is adopting a pragmatic “forensic accounting” gameplan. That is not a criticism of Ireland or Joe.

The laws of rugby are like the tax laws. The big corporations with banks of layers and accountants bend and manipulate the tax law loopholes for their own gain. Tax legislation is always many steps behind the accountants.

The current laws of rugby are well behind smart-thinking coaches like Joe Schmidt and the rapid development of organised defensive systems. Smart coaches are manipulating the laws so running rugby is penalised and a kicking game is rewarded.

I admire the thinking process, but I don’t like watching the outcome.