James Tracy: ‘It was the longest, shortest day of my career’ 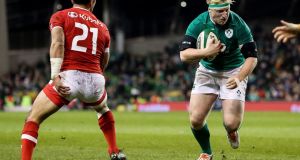 Ireland’s James Tracy runs in a try during the Guinness Series match against Canada at the Aviva Stadium in Dublin on Saturday. Photograph: Tommy Dickson/Inpho

James Tracy laughed when teased that he currently boasts the best try-scoring strike-rate in Irish rugby: one cap, one try, in a little over 20 minutes of test rugby, his effort the final punctuation mark in scoring terms of Ireland’s victory over Canada.

It was apposite that Joe Schmidt should hand the 25-year-old Newbridge native his Ireland debut because it provides a neat full stop to a conversation dating back several years.

The Irish coach, then at Leinster, asked Tracy, a loosehead prop at the time, whether he wanted to play international rugby. Schmidt gently advised that he didn’t think that the player possessed a big enough frame to bear the weight required to bulk up and play at test match level, suggesting he consider switching to hooker.

Tracy acquiesced and immersed himself in the conversion, spending hours throwing, and invariably inveigling teammates to help out. It wasn’t a smooth transition.

Schmidt left for the Ireland job, Matt O’Connor preferred others in his time in charge and it is only under current coach Leo Cullen that Tracy was afforded an opportunity, one he grasped emphatically.

He knew Schmidt’s methods, in keeping with the rest of the Leinster contingent of eight new caps named in the match-day squad, but confessed to really enjoying the training environment and build-up to the Canada match.

“I’m lucky enough I was there when Joe coached [in Leinster], had a taste of that before, so at least I knew what I was going into, but it was amazing to see: the attention to detail, the calibre of players in there and just how focused everyone is; that drives you on.”

Tracy explained: “We would have been friends for ages and that was really comforting during the week. You had these guys that you had played with over the years and you have the craic when you are playing against them provincially and stuff like that. Once you see them you are straight back into habits with old friends.”

He admitted that it had been “the longest, shortest day of my career” depending on at what point he started to recall events. The build-up dragged out, the game flew by. There was also a subtle difference in the role of replacement between province and country.

“It’s a bit different [with Ireland] today because I didn’t know that I was coming on. With Leinster we know between the minutes of anywhere from 45-60 there is a very good chance you are getting on because we usually do the full change of the frontrow to freshen it up. With Joe, he didn’t tell me I was coming on.

“There were about five minutes that I had to get ready, simmer on the sideline. I was just thinking about my roles and my responsibilities. Even though it is my first cap, it is the team first so [it’s about] getting on and doing my jobs right, going through all the different plays and what I wanted to get out of the game.

“The more emotionally invested you get, the worse it is. You want to bring a bit of emotion but you can go too far with it.”

A highlight was the injury-time try at the end of the game, the hooker demonstrating footwork and strength to force his way over. It was fuelled by a little fear. “I was thinking I better score this because I will be in trouble if I don’t.

“I looked outside me and the winger was going to go for an intercept if I tried to do quick hands. So I decided to put the head down and score this. I was looking at the line and my body did the rest.”

Tracy’s starting point and circuitous route map has made the journey extra special.

1 Football fan survey: Almost half of Irish adults say they support a club
2 Getting behind the rotten core of rugby with Dan Tuohy
3 Irish squad in the dark as clouds hang over Six Nations
4 Ryan Baird scores a hat-trick as blue wave rolls over Glasgow
5 Unbeatable, unbackable, a hero: What’s next for the great Faugheen?
Real news has value SUBSCRIBE