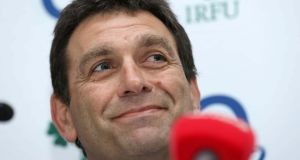 The IRFU’s new performance director David Nucifora aimed for the skies when he was introduced to the media on Thursday afternoon as part of a flying reconnaissance mission with his family.

In outlining his “wide-ranging” brief the 52-year-old Australian expressed the hope that he can help Irish rugby to the top of the game.

Nucifora’s impressive CV includes a three-year stint as head coach with the Brumbies, concluding with their Super 12 triumph in 2004, and a five-year sojourn in Auckland with the Blues, the first year as a technical advisor and the latter four as head coach.

In the first three of those years with the Blues, he worked with Joe Schmidt, then the franchise’s backs coach, and helpfully too they clearly have a good working relationship. Schmidt may not entirely welcome the additional pressure that comes with Nucifora’s World Cup-winning ambitions - although he stressed the 2015 tournament was a short-term target as part of his five-year contract up to 2019.

Clearly, though, his belief in Schmidt as a coach is immense, and he cited the belief which the Kiwi instilled in the Irish team as a key factor in them winning this season’s Six Nations title.

Perhaps most relevantly of all, Nucifora has subsequently spent four years (2009-12) as general manager of the Australian Rugby Union’s high performance unit.

He said he was “very honoured and privileged” to have been entrusted with his new “very wide-ranging role”.

He added: “It encompasses working not only with the national team, but very closely with all the provincial teams on the development pathway, making sure that we have the most efficient and productive pathway within Ireland.”

“Our aim is to keep producing players of a world-class level to ensure that the national team has the ability to choose from a really strong pool of players. The role also looks after all of the underage teams, the age grade teams that exist off the development path in the men’s, women’s and sevens game.”

Highlighting when and where players move within the provincial system appears to be part of that brief, although, when asked Nucifora said: “I probably don’t have a view, straight up, on the movement of players between provinces. I think that players getting exposure to the highest level that they’re capable of, or ready for, is important.”

“I don’t think that players sitting on the sideline in tracksuits benefits anyone. That’s an important part of development. Also, players want to play. We’ll be working on a system where we don’t want players warehoused in one particular spot.

The IRFU’s accompanying Plan Ireland ‘White Paper’ appears to suggest he will be Schmidt’s boss, to which he laughed.

“Ultimately, I’m responsible for Joe’s role, I suppose, and their performance, but having worked with him before, I see it going forward as something that we’ll be working very closely together.”