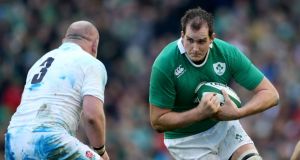 Devon Toner is the most improved player in the Irish team. His defensive work against an intelligent Welsh lineout will once again be crucial. Photo: Dan Sheridan/Inpho

It is like when I was a kid at school and we were forced to learn the Progressive Barn Dance. Everyone in the hall knew the steps. The simplicity of the movements made even those with two flat feet get into the “action”. That is if a progressive barn dance can ever de described as action.

Wazza ball is an attacking system as prescriptive as that dreaded barn dance.

After the setplay ball is won, Wazza ball kicks in. The attacking forwards run in the same direction as the first pass. If the lineout is on the left touchline, the attack is always to the right.

With close runners off the scrum half, the Welsh use every centimetre of space until they get to the opposite touchline. They then come back with wide passes to their main ball carriers, such as Jamie Roberts and Faletau.

Like the barn dance, everyone knows their role. The trouble for the Welsh is the Irish know their role as well. Ireland can plot which Welsh player will run the ball and where they will run. In the defensive sessions at Irish practice this week, Les Kiss would have simulated Wazza ball attack with Ireland targeting “choke tackles” on isolated Welsh runners.

Kiss will not be telling the Irish players to leave any room for the Welsh when Wazza ball starts.

While I have been very critical of the lack of an organised or observable Irish running game, the Irish defensive system has been world class. Over the past season Ireland have developed a defensive unit that is now a weapon. Ireland have conceded only 23 points. Exactly half the next best defensive record held by France on 46. An amazing achievement.

Despite the familiarity of the Welsh attack they do have formidable runners across the park. North, Roberts, Halfpenny, Faletau and Warburton will test Ireland like no other team.

However, it is away from the overstructured confines of Wazza ball that Wales will be looking for an advantage. Ireland kick more than any team in the Six Nations. Kicks are only as good as their chasing defenders and Conor Murray’s accurate box kicks have been chased with enthusiasm. Simon Zebo was simply inspirational in his brave contesting of the kicks against England.

Zebo and Tommy Bowe are both excellent chasers. They will need to be as Wales will be looking to turn the Irish kicking game into Welsh counterattack. Leigh Halfpenny is one of the best counterattacking players in world rugby. Ireland cannot give him any latitude.

I am delighted Dev has proved me wrong. His defensive work against an intelligent Welsh lineout will once again be crucial to gain Ireland possession . . . for Murray and Sexton to kick away.

Wales will be defeated by a modern version of good old-fashioned Munster rugby. A superior Irish kicking game, backed up with a solid set piece, with tough, physically hard men, working in a world class defensive system seems unstoppable. It is highly effective and I admire the passion and commitment with which the Irish players are implementing their systems.

I want Ireland to win and be successful, but I find their play uninspiring, verging on the point of melancholy. I feel that 15 years of hard work, by a lot of people, to develop running rugby in Ireland is being jeopardised. The farm is being sold. I hope we have enough credit to buy it back before the World Cup.

If Ireland’s template of a kicking game and great “D” is the way to gain success at international rugby, then I grieve for the death of panache in the game I love. Please, Joe, don’t let it be so. Wazza ball as an attacking template is dead.

Ireland will win, playing Schmidt rugby . . . and I can promise you, my pun is intended.