Ireland up and running with convincing win over Scotland

Straight from the Ireland v Scotland game at the Aviva, Gerry Thornley and Liam Toland give their assessment of Ireland's victory. 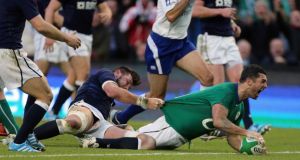 It was a curious afternoon, one initially pockmarked by frustration as Ireland huffed and puffed their way through the opening 40 minutes. Flecks of rust were visible in their patterns early on but they brought greater authority and precision back on to the pitch after the interval.

The day had begun with the news that Paul O’Connell wouldn’t play because of a chest infection. Jamie Heaslip took over the captaincy, producing an excellent display that earned him the man-of-the-match accolade.

Dan Tuohy was asked to fill O’Connell’s jersey and the Ulster secondrow managed that very effectively, demonstrating a voracious appetite for hard graft and embellishing a fine display with a couple of lineout steals. In some respects, his performance offered a microcosm of Ireland’s, plenty of perspiration but initially lacking subtlety and precision.

It took a moment of genuine class from Jonathan Sexton - the most influential player on the pitch - to redefine a contest whose content was mired in an endless morass of re-set scrums, box kicking, lateral back play and squabbling over ruck ball.

The home side led 6-3 as the first half petered towards a conclusion, or that’s what it looked like until Sexton stepped inside Scotland captain Kelly Brown, accelerated through a gap using a powerful fend, stepped around Greg Laidlaw and galloped 50 metres before releasing the supporting Heaslip with a gorgeous long pass off his right hand.

The captain scampered down the touchline, bouncing Stuart Hogg’s attempted tackle but the covering Max Evans did extremely well to force Heaslip’s foot onto the touchline for a brief instant, before the number eight grounded the ball.

If the Scots thought they had escaped they were mistaken as Tuohy pilfered the lineout, and after a succession of one-out runners had brought play to the centre of the pitch, the Irish backs worked an overlap with Rob Kearney putting Andrew Trimble over in the corner, the fullback taking a ‘rib tickler’ for his troubles.

The try transformed the contest, even allowing for Sexton’s failure with the conversion, the only errant strike of the afternoon as he kicked five from six attempts. It must have deflated the Scots as they traipsed to the dressing room, and maybe even prompted a little head scratching.

They had defended pretty comfortably for most of the half. Ireland’s back play was sterile for most of the opening 40 minutes, undermined by lateral movement, crabbing across the pitch without committing defenders. The Scottish defence just drifted from one man to the next before gang-tackling the receiver when Ireland ran out of numbers.

There was also an over-reliance on Conor Murray’s box-kicks, excellent for the most part, but as a primary attacking gambit a little underwhelming. The scrumhalf did though ensure that the Ireland chasers were in a position to contest the high ball.

The rucks turned into a genuine contest, a state of affairs that referee Craig Joubert was happy to facilitate. Ireland were not aggressive enough in rucking past the ball and allowed the Scots to get themselves into positions to poach possession. The visitors also managed to, in the eyes of the referee, legally collapse a couple of Irish mauls that saw them win turnovers in possession terms.

Time and again Joubert’s voice could be heard shouting ‘the maul has collapsed, they (the Scots) don’t have to roll away.’ Playing the referee is part of any match and Ireland needed to be a little more receptive to the manner in which he was controlling the game. They did so to much better effect on the re-start.

The Scots certainly weren’t having it their own way at ruck time and Peter O’Mahony forced a couple of penalties having latched onto the ball, while Chris Henry was very effective too. Sexton’s two penalties to one from Laidlaw preceded Trimble’s try. In try scoring chances it was an oasis in the desert.

Ireland were much more precise after the interval, despite conceding the first score, a penalty, to the boot of Laidlaw. The were much more aggressive at the rucks, speeding up the possession and also dominated the setpiece of lineout and scrum. It was a turnover from the latter on 46 minutes that allowed them to introduce daylight on the scoreboard.

Dave Kearney was stopped a couple of metres short as Ireland swept right across the pitch but the Scots were penalised for coming in from the side at the ruck. Heaslip pointed to the corner, Tuohy caught the lineout and the Irish captain was at the back of the driving maul that spliced the Scottish defence.

Sexton kicked the conversion and added a penalty on 56 minutes, as Ireland began to dominate more territorially. The Scots who began the match brightly looking to put width on the ball were now happy to kick for position once their go forward ball had been effectively neutered.

Ireland were managing to pinch possession at rucks or at least slow it down.

On 71 minutes the pressure told as Ireland scored a third try. Tuohy ran a clever line and offloaded neatly to Henry inside the Scottish 22. From the ruck, Rob Kearney, cut back hard against the grain, showing good strength to force his way past a couple of tackles and celebrate his 50th cap with his ninth try for Ireland.

It could have been an even more memorable day for the Kearney family as brother Dave almost dotted down with the last play of the match but the television match official ruled against him.

Ireland coach Joe Schmidt will have been satisfied with the victory and certainly the post interval improvement. The pack underpinned this win, by dominating set piece and working hard at the breakdown.

Individually and in unit skills there were much to admire. Once the home side figured out how to speed up the ruck ball they looked more dangerous.

Everyone of the pack contributed handsomely, Murray box-kicked superbly for the most part - once or twice he shouldn’t have - while Sexton was the catalyst for Ireland’s better moments on a day when Brian O’Driscoll became the most capped Ireland player of all-time in making his 129th appearance.

There’s no doubt that the back play lacked penetration and at times direction and this will have to be addressed before next Saturday.

While enjoying getting off to a winning start, Schmidt knows that there’s plenty to do in the six day turnaround to try and guarantee the performance levels that will be required when Wales coming calling.