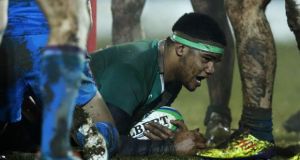 Ireland had not lost to Italy in seven previous meetings in the Under-20 Six Nations but they must have feared they were in a for tough night when the underdogs ran in for a converted try after just two minutes.

The sides drew two years ago in Italy and with the northern city of Biella covered in a few inches of snow, the pitch at Stadio Lamarmora wasn’t long developing into a quagmire.

Indeed, the game only went ahead thanks to a day of shoveling snow by the members of the local Biella club so credit then to both sides for serving up a decent game in such conditions.

Ireland’s more clinical work ultimately saw them home in what was a very encouraging start to Nigel Carolan’s reign.

The Italians made a dream start when scrumhalf Luca Petrozzi broke from deep and while his opposite number, Irish captain Nick McCarthy, got back to nab him he couldn’t prevent the offload to flanker Dennis Bengamin who ran in by the right post before going over with a swan dive.

The Irish response was good. They sensed they had an edge up front and went to the right corner with a penalty. Alex Thompson won the lineout and when they got the drive going, flanker Josh Murphy got the touchdown.

Ross Byrne landed the touchline conversion to kickstart a good night with the boot, with his tactical kicking in open play constantly forcing the Italians on to the back foot.

But Italy made their attacks count, with Maicol Azzolini adding to his earlier conversion with a penalty from 40 metres on the left.

Once again Ireland responded well and attacked out wide before Garry Ringrose made the hard yards through the cover and offloaded for Greg O’Shea to score a fine try which Byrne converted to for an 14-10 Irish lead after 16 minutes.

Ireland continued to press forward and extended their lead 11 minutes from the break with another good lineout drive, Murphy winning the ball this time and flanker Rory Moloney supplying the touchdown.

Italy refused to wilt and created an excellent try through good running and good hands for wing Luca Sperandio to score in the right corner, much to the delight of the home crowd of about 700.

Ireland lost tryscorer O’Shea to injury after a heavy collision but they finished the half with a fourth try when hooker Zack McCall blocked down a kick on the right wing and had the legs to sprint away and score, with Byrne’s conversion making it 28-15 at the interval.

Ireland put further daylight between the sides five minutes after the restart. Byrne continued to control proceedings at outhalf in an excellent display and he and replacement Joey Carbury’s were the last hands in a good move which put fullback Billy Dardis over in the right corner.

Ireland never looked back after that and the Italian challenge wilted as the pitch continued to disintegrate on a freezing night.

Captain McCarthy got in on the scoring when he spotted a gap after another good lineout drive, with Byrne converting from the left wing to make it 40-15 with 15 minutes remaining.

Replacement Cian Romaine completed the rout in the closing minutes as Ireland posted their biggest ever points tally against Italy in the competition and came within a score of surpassing their 39-0 record win over the Azzurri.

Chelsea stand tall defensively to repel Sevilla and come away with a point 22:22
Champions League round-up: Juventus and Barcelona off to winning starts 22:11
Waterford’s Pauric Mahony out for the season 21:26
Hugo Keenan could start in changed Ireland team against Italy 21:04
Guardiola takes blame for City’s European failings 21:12
Crossword Get access to over 6,000 interactive crosswords