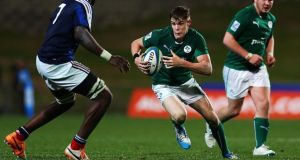 Ireland U-20 38 Fiji U-20 0: There is a Latin phrase ‘omne trium perfectum,’ which translates as everything that comes in threes is perfect or complete. It is a motto that this young Ireland team might care to adopt after this morning’s victory over Fiji in the QBE stadium in Auckland that earned them a place in the Under 20 World Championship semi-finals for only the second time in their history.

Both were products of their scrum dominance and indeed the third penalty try in the 68th minute of the match, provided their fourth in total at that stage and therefore confirmed the bonus point that they required to guarantee a place in the semi-finals. They will face England, who beat Ruddock’s side quite comfortably ini the Six Nations earlier this year, in Sunday’s semi-final, again in Auckland (6.05am Irish time).

It is the second time that an Irish side has reached the penultimate stage of the tournament emulating the squad of 2004 - it was an Under-21 competition then - who were beaten in the final by New Zealand in Glasgow.

Jamie Heaslip, Tommy Bowe (he did not play in the latter stages because of injury) and Tomas O’Leary to name three came through from that side to forge excellent senior international careers and there are several from coach Mike Ruddock’s current squad that might ape that progression.

Former Blackrock College schoolboy and current UCD student Garry Ringrose was absolutely outstanding. A year young for this age-grade, and one of seven players in the match-day 23 that will be eligible again next year, his balance, footwork, vision and lines of running were a joy to behold in extremely difficult conditions. He invariably beat the first tackler, took his team over the gain-line, offering direction and impetus in attack and technically excellent defence.

For good measure he took on the place-kicking responsibilities as outhalf Ross Byrne, who had fulfilled those duties in the opening two matches (20 points) may have been carrying an injury. Ringrose wasn’t tested with any of the four conversions or a successful penalty to boot, all taken from in front or close to the posts. He did miss a penalty attempt and miss-place one pass but even Homer nods.

The young outside centre doesn’t need any comparisons thrust upon him; suffice to say he’s got game. Ireland fullback Cian Kelleher was another to stand out, sharing many of the same virtues in eluding tacklers. Conditions were horrendous, driving rain and high winds, but the former St Michael’s schoolboy was very assured in everything he did.

There were other eye catching cameos, right wing Ciaran Gaffney in the manner in which he took his try just after half-time to deliver momentum at a crucial time, centre Dan Goggin prior to his shoulder injury and his replacement Harrison Brewer who discharged the responsibility of getting over the gain-line with impressive power.

Given that the pack forced Fiji to concede three penalty tries, their work in this facet of the game must be recognised, so too the lineout where the stole so much of their opponents’ possession. Denied that platform and decimated numerically for that period before half-time the Fijians in truly dreadful conditions for running rugby had to live off scraps.

Irish captain Jack O’Donoghue had another superb outing and he received plenty of support from his forwards, especially Peter Dooley, a couple of penalties notwithstanding, Stephen Gardiner and Ross Molony. What will have pleased Ruddock too was the impact of replacements Frankie Taggart, who was outstanding, and Oisin Heffernan, who also made a significant contribution and was unfortunate not to cap it with a try.

Ireland though will have plenty to work on between now and a semi-final. The game management and execution was sloppy at time, even allowing for the difficult conditions. Ireland huffed and puffed for most of the opening half but until Fiji’s persistent infringing and lack of discipline caught up with them, Ruddock’s side clung perilously to a 3-0 lead. The Fijians had even missed with a dolly of a penalty from outhalf Josese Kurukava early on.

Referee Ruiz awarded two of the penalty tries when the Irish scrum while motoring initially and then brought to ground was still some eight and 10 metres respectively from the Fijian line. Other officials might have wanted to give a couple more penalties before running between the posts. In fairness to the Frenchmen he was correct in what he did and had he maintained that consistency of application in the second half Fiji would have been a few more players down.

Gaffney’s try just after the interval, a well crafted and executed move, as the Galwegians’ player raced off the blindside wing and through a gap in midfield meant that Ireland had 32 minutes to grab the all-important fourth try. Handling errors and questionable decision making meant that it wasn’t until the 68th minute that they accomplished this feat with their third penalty try.

Replacement outhalf Conor McKeon rounded off the scoring with a try, which he improved upon, following a beautiful bit of running and offload from Ringrose three minutes from time. It added a little gloss to the finish. Ruddock will be hoping that shoulder injuries to Goggin and tighthead Rory Burke, heal quickly and whatever Byrne’s issue is also clears up too.

Tougher days lie ahead but this squad has displayed enough character and ability to suggest they won’t be cowed by the challenge.