Ireland’s second string tie up victory over Scotland despite slips 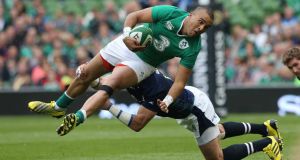 Another win then surrounded by more positives than negatives.

“The real positive is we can report a clean bill of health,” said Joe Schmidt.

Dave Kilcoyne forced his way into the former category along with Jared Payne and perhaps Tommy Bowe. The rest did well enough to avoid the latter, more or less.

Plenty of Ian Madigan’s snappy distribution found Simon Zebo but the Cork man made little headway in his preferred fullback slot. Zebo flung one pass into the west lower while Madigan scuffed the restart after Blair Cowan’s try.

Slight mistakes, they are hardly droppable offences, and when it really mattered, the class of both men shone through.

Still, a Munster man must have given Zebo the man of the match award. Payne deserved it or a backrower.

It’s unlikely either Madigan or Zebo will make Joe Schmidt’s starting XV to face France on October 11th but both remain valuable bench options. Interestingly, Madigan was allowed play out the full game.

On 15 minutes he combined neatly with Gordon D’Arcy – running a sharp decoy in what could be his last time playing on a pitch he first graced for Clongowes Wood College in 1996 – and Bowe before Chris Henry was driven over the try line by Kilcoyne.

“Ian demonstrated he can play the position,” said Schmidt of a player he has started at outhalf only twice in two years. “I thought his line kicking was spot on. We got some good distance to attack from his line kicking. His kicking off the tee was super [but] we probably could have done with that last one, which was one of the easier of his kicks. His pass delivery was very positive.

“Even defensively he made some good tackles and some tackles he could have put more pressure around.

“He’s a pretty good guy to do self analysis and be tough on himself and look for more from himself.”

In same the same breath Schmidt, ever the poker player, added: “I thought Paddy [Jackson]grew into the game well last week.”

And Zebo? “He did some things really well. Whenever we saw the ball go in the air and Simon was going up we had a real confidence that he was going to look after that.

“Defensively he is still getting his angles right, coming up and closing off that outside player. For a guy who hasn’t played a massive amount of fullback in recent years that’s something we will continue to work on with him. There was some really nice bits of skill from him. He beat Vernon once on the outside with that in and away he does so well. Some nice passes. Obviously that line he ran on the inside of Ian Madigan to create and finish the third try was spot on.”

Lots of positives but a worrying defensive negative.

Cowan’s try, after 30 minutes of drudgery, was effectively created by Dave Denton bumping Mike Ross and sucking in two tacklers to create space in the right corner. Peter Horne converted but missed a penalty before half-time.

Everyone soldiered on, nobody playing close to the edge but seeking to impress nonetheless. At least Seanie O’Brien was getting through a mountain of work on his seasonal debut, which will be cherished by the Tullow man, who snugly fits the captaincy role. Food for thought. Of which there was plenty.

Did we mention Payne’s neatness and tidiness? Comparisons to fellow Kiwi centre Conrad Smith are unfair, for anybody wearing the 13 jersey in world rugby, but Payne has that similar head swivelling awareness.

Henry Pyrgos squeezed under debutant Jack Conan and Ross for a second Scotland try moments into the second half, just as the day’s first injury disaster struck; Scottish loosehead Ryan Grant was carted off with a possible leg fracture. He was followed moments later by tighthead Jon Welsh, on the insistence of referee Pascal Gauzére, for a Head Injury Assessment.

As ever with Ireland, when in doubt they went to their maul. A half break and offload by Conan put Henry in space and a quick recycle saw Madigan launch Kilcoyne through midfield. They rumbled on, won a penalty, Madigan kicked to touch and the lineout drove Seán Cronin over. Madigan’s conversion had them 14-12 ahead.

The biggest cheer was reserved for the arrival of Paul O’Connell. You immediately heard his dulcet Limerick tones on the ref link. We also heard Gauzére explain to Cronin why he awarded a Scottish penalty. A new, or perhaps more stringently enforced law prohibits cleaning a player out around the neck. Horne made it 15-14 to Scotland with an hour played.

That woke Ireland up. Dave Kearney, in for Bowe, broke the line and from another quick recycle Madigan fed Zebo who skipped out of a tackle before gliding over.

They must have hit the snooze button because within three minutes Scotland had regained the lead when Luke Fitzgerald’s clearing kick missed touch. Hugh Blake flung the ball across the field, Sean Lamont exposed some slack Irish defence before his offload caught Zebo flat footed as Horne raced away from Isaac Boss.

Ruaridh Jackson’s conversion – Horne had cramp – put the emphasis back on Ireland.

Eoin Reddan’s improved service contributed but it was a wonderful piece of skill by Madigan that settle matters. Ireland always looked capable of upping their intensity levels and when they did, the outhalf saw the space in behind Scotland’s blue line. His perfectly weighted kick found a grateful Fitzgerald.

Schmidt refused to provide any fresh information about the 14 backs that will make his final cut on August 31st, even when asked about the need for two inside centres.

“I think you are obsessed with the numbers and we are too. I understand that because it is something that is always in our thinking. We are trying to prepare the players as well as we can.”

So, in two Test matches he has started 29 men, capped two in Conan and Nathan White, and all the while Johnny Sexton, Conor Murray, Robbie Henshaw, Rob Kearney, Cian Healy and Peter O’Mahony are yet to appear.