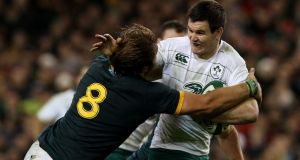 On 41 minutes and 39 seconds Devin Toner rose unopposed to field Seán Cronin’s lineout throw. Ireland had once again varied the target and this one was crucial. As South Africa had bludgeoned their way around the park, and in particular bludgeoned the scrum, Ireland looked fatigued and vulnerable.

Yes, tries change games but what happened in the next five seconds tells the Joe Schmidt tale and, with it, the energy and belief that exists in abundance in this side. It was a crucial score for a million reasons; but the energy it gave the home side was chief amongst them.

The irony, of course, was Victor Matfield’s role in Rhys Ruddock’s try. The Springboks had stayed on terra ferma, electing to dismantle the lineout seven metres from their line.

Toner’s pod had a second wave of Jamie Heaslip, Ruddock and Paul O’Connell attacking the ball. Matfield spotted the danger and, verging in off-side territory, ploughed into O’Connell. The irony was that Matfield, the lineout legend, in trying to neutralise O’Connell’s impact propelled the Irish maul into a left-hand circling spin where the Springboks were weakest and over Ruddock went.

To understand the value of this score to Ireland, one must understand the damage inflicted by the Boks. Both Mike Ross, whose 74 minutes on the pitch said so much about his character, and O’Connell behind him, were at the pin of their collar in every one of those eight Irish scrums.

The Springboks were square and solid for their own put-in but ruthless on Ireland’s. ‘The Beast’ followed up his All Black methodology at the Aviva with a powerful dip on engagement to ensure he got slightly outside Ross, before a lift of his shoulders forced a left-hand destabilising wheel for Jamie Heaslip to deal with. The impact of overwhelming pressure in general play was fascinating to watch too.

Ireland won a six-man lineout on 33 minutes with Heaslip off the top at the front to Conor Murray. Ross stood at the tail, with Toner in front. The Springboks, having stayed on the ground, poured through to pressure Murray’s pass and Ross instinctively bearhugged Duane Vermeulen. This was not a silly act, it was an act of a man exhausted and reacting instinctively to the threat. Any other match and Ross would have stepped awkwardly into the space Vermeulen was entering and referee Romain Poite would have been happy.

The intelligence in Ireland’s play under such physical onslaught was the great success from Saturday.

Ireland didn’t just compete but competed using a variety of methods. Jack McGrath circled around the Springbok lineout as they attempted a lineout maul; or Ireland stayed on the deck or hoisted at the lineout.

As suggested on Friday, Ireland’s acknowledgment of the Springbok high-carrying position was targeted in the choke tackle. One man stopping the ball carrier with the next man in to rip the ball, as Robbie Henshaw did on 64 minutes on monster Marcell Coetzee, while O’Connell chopped. Richardt Strauss managed it on Jannie du Plessis and countless times Ireland depowered the powerful Springboks with guile, discipline and above all intelligence.

South Africa, fresh from their All Blacks victory, looked like a side ready to bludgeon and, when they were stopped in their tracks, a lack of backline crispness neutralised their back three, in particular the wonderful Willie le Roux.

The lack of Springbok invention was partly because of a brilliant Irish defence and partly because they quickly reverted to the all-out physical onslaught. That they ignored multiple penalty goal opportunities hinted at a slight arrogance towards the Six Nations champions, but it cost them dearly.

It was a magnificent battle where Ireland met each challenge head-on. But South Africa were uninspiring. This shouldn’t in any way detract from the Irish performance, where Jared Payne and his partner Henshaw deserve praise for immense contributions, Payne running beautiful lines of support. In such a tight environment, precious few were converted into line-breaks, but the support running will not have gone unnoticed by Joe Schmidt or his team-mates.

Clearly Johnny Sexton was very conscious of the South African defensive line, electing to chip into green grass and crossfield, and putting up plenty of welcoming garryowens to whet le Roux’s appetite.

Statistics tell one story but, as suggested on Friday, the Springbok’s were slow to realign defensively especially on their blindside, and Ireland punished this with Tommy Bowe’s try. Sexton attacked Cobus Reinach’s inside shoulder and Murray targeted the bent leg blindside defence to send Bowe over. That it came from a 71st minute scrum is once again testament to Ross.

Yes, Sexton was man of the match, but three others deserve great credit; Les Kiss for his defensive system, such as attacking the Springboks way beyond the gain line; video nerd Mervyn Murphy in exposing weakness in the Springbok strengths; and finally, Rhys Ruddock, who was handed the number seven jersey on Saturday morning. He proved to be the perfect man in the perfect place.