Ireland rugby team have only themselves to blame for Six Nations ups and downs . . . and Wayne Barnes 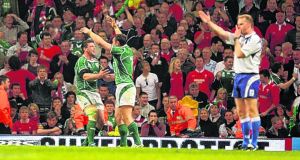 It’s not easy being any of the Ireland half back these days. You’re either told to feck off to Racing Metro then you tear a hamstring against England, get ejected from the squad and be brought back in again like a verse from Lanigan’s Ball , make your debut, shank a few kicks and take the rap for the misery in Murrayfield, get taken off against France as you’re playing the match of your career or you come on with 20 minutes to go, and at the age of 32, you almost provide the match winning play for Keith Earls with a deft kick to the corner. But instead, two minutes later, you break your leg.

And why would anyone want to be a place-kicker? Hours of lining up an oval thing on a plastic thing, endlessly attempting to get it in between two wooden things, over and over, rhythmically, painstakingly, until one day . . . finally, you do it in your home stadium, only for the announcer to get your name wrong.

Its’s not like our outhalf last week has an unusual name like Silvester or Tarquin, so when Paddy Jackson managed to nail a tricky opening kick at the Aviva Stadium there it was in plain wrongness – “Jamie Heaslip’s try converted by number 10, Paddy O’Brien”, bellowed Mr Jollypants with the biggest microphone in town. Now while Jacko has been the subject of intense scrutiny recently, this is the first time he has been mistaken for the former shiny- headed Kiwi referee, so there’s just no explaining some gaffs.

We like our scapegoats in Ireland, and while Father Deccie can legitimately be blamed for some minor disasters of late, he can’t really be blamed for injuries, nor to some people’s apparent disappointment, be responsible for the national debt.

At this stage he must be half expecting Les Kiss and Gert Small to pull up in training. Would anyone notice?

As team manager Mick Kearney pointed out, there’s a touch of GUBU about the whole affair.

It’s been GUBU and a half, alright, and as the B part of that suggests, in the end we could have lost to Wales, should have beaten England, could have hammered Scotland, and perhaps beaten France had half our team not resembled the opening five minutes of Saving Private Ryan .

Shoulda, coulda, woulda, but in truth, even with the injuries, Ireland really only have themselves to blame. And Wayne Barnes. Okay, maybe not.

Soldiered on
Luke Marshall certainly soldiered on until he couldn’t take any more against France. You realised as you watched him flopping off the pitch this fella has all the physical attributes of a professional rugby player; the thighs of a rhinoceros, the shoulders of a bear, the heart of a lion and the face of a slapped backside. This is what it takes these days.

And so to Italy and the last game of an eccentric championship. One which promised so much after the filip in Cardiff, but then went the way things usually go for Ireland these days. Rapidly downhill.

However a win in Rome would at least give the team something to build on and something to celebrate. Remember that feeling? Johnny Sexton’s return is a major lift for Ireland though, and in his absence it became crystal clear how vital he is to the team’s future.

The scrum, will as as always be a major factor in determining the penalty count and with Wayne Barnes (yes, him) patrolling the subtleties of frontrow skulduggery, with about as much efficiency as Giovanni Trapattoni running a crèche, it should make for a lot of kicks at goal.

On ITV this week, presenter Adrian Chiles said to Roy Keane “one word, who’s going to win the champion’s league?” When Keane responded with “Bayern Munich”, Chiles hesitated, but moved on, realising who he was dealing with and deciding not to remind him about the one word part of the question. You’d imagine Barnes wouldn’t have been so smart and might have ended up eating hospital food that evening.

Thinking about a preference between Wales or England becoming champions is like wondering whether would you rather have hives or bad breath. Neither is to an option you’d exactly relish, but you’d have to say England as the only unbeaten side in the tournament probably deserve it, even if at this stage they should really take ownership of the tag “the luck of the English” because if we ever had any, it appears most definitely to have run out.

While France and Scotland will scrap for the meagre pickings in Paris, the one area of interest will be watching the twin towers of Grant Gilchrist and Yoann Maestri compete in the lineout.

Warren Gatland hovers over the players of the home nations like the man above at the pearly gates, but a win on Saturday might mean a few more Irish accents permeating the Australian air.

The Grand Slam beckons for Ireland’s women. As Trap might say, Forza Irlanda. Though he’d probably be more likely to ask what rugby is first.