Reaction from the Irish team announcement in Carton House, as Cian Healy and Luke Fitzgerald are the only changes to the Irish team that lost to Wales. 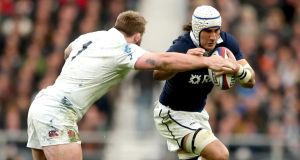 Charles R Swindol is convinced that life is 10 per cent what happens to him and 90 per cent how he reacts to it. The loss of a lineout can at times have a far greater impact than 10 per cent. Hidden alongside last weekend’s 260 breakdowns were 11 scrums and 20 lineouts. In truth all played a massive part in the ultimate outcome. But field sport can’t be isolated in single plays.

For instance Ireland lost four lineouts against Australia in November and won the match but lost four against Wales and lost. The difference? Momentum, field position, scoreboard and most importantly emotional energy impact when those losses occur.

That lineout loss on 59:46 on their five-metre line, having just survived the Wales turnover and counter attack that threatened a try, was a huge blow to the emotional energy in green. Five from home Ireland shortened to a five-man lineout with the props at either end leaving a formidable pod of Devin Toner, Paul O’Connell and Peter O’Mahony in the middle. It failed. A shortened lineout heightens the success rate and five from home means there are buckets of exit strategy options with the Irish support players five metres closer than the Welsh.

The score was 15-9 to Wales and Ireland had been battered in the corridor of power. The lost lineout in these circumstances takes on monumental proportions – back defending once more but this time five metres from home.

Put simply, a struggling Scotland will have spotted weaknesses in Ireland’s 10-match bullet proof form until Cardiff and – although nowhere near Wales – they’ll sense a chance.

The opportunities: Scotland miss many tackles and concede many penalties, with Scotland’s openside Blair Cowan a massive penalty offender. Considering the furore over Wayne Barnes’ interpretations last week Ireland need to expose Cowan to the referee. The more yards after contact Ireland gain will put Cowan into a reverse mode where he’ll be tempted to ignore the gate, focusing on the ball. This will create the wrong picture for referee Jerome Garces, forcing decisions which for an openside is not ideal. But yards after contact will also expose the Scottish defensive structures.

Yards after contact is an interesting challenge for Ireland. In Cardiff time and again the ball carrier took possession standing before looking up and trying to eke out a gap that simply didn’t exist. Tomorrow Ireland can’t afford to replicate this play – not necessarily because Scotland have the defence to neutralise but because of the challenges that lie ahead.

Start as you mean to continue. The standing start and one-out carry should be banned for the next 80 minutes. At worst the first fatty receiver should ship one out prior to contact with a hard running line from Seán O’Brien.

Scotland will pressurise but nowhere near what Wales achieved and absolutely nowhere like the Welsh breakdown. The man that’ll suffer especially is inside centre Matt Scott who will be starved of crucial seconds to reset his defence. Adding to his woes, off the top Irish lineouts to Robbie Henshaw. Ireland need to target the Scottish blindside winger . In Cardiff Ireland targeted the inside blind ball off openside plays; tomorrow they need plenty of rewinds down the tram tracks that will reap fruit.

Richie Gray’s absence is crucial to Ireland’s lineout success and his replacement Jim Hamilton is a monster who will dwarf the Irish forwards. Speed over the ground is not his forte and, although a good Scottish target, he tends to stay high in the maul weakening their set up, especially off shortened lineouts. Hamilton packs down behind tighthead Euan Murray which can be exploited by Cian Healy, assuming Garces is on the same wavelength.

David Denton in the middle of the Scottish backrow is a powerful carrier when in the mood but lacks the consistency and simply drifts out of games for long periods. Rob Harley, who is demoted to the bench for beefier breakdown presence Adam Ashe is a loss to Scotland’s lineout defence.

Scotland have over recent years been full of super, but flawed, rugby in the exciting image of Glasgow and their coach Gregor Townsend but this Scottish team have flaws all over and, in lacking sufficient quality, can be beaten by plus ten.

Finally, plus 10 Irish points will stifle England’s Championship hopes who will beat France by single figures but, Wales will put 30 plus points on Italy.

So the real questions: did Ireland beat the Italians by enough and can Wales transfer their intensity from Cardiff to Rome? Unfortunately, I think so.

Fixture pile-up means Spurs could sacrifice League Cup 18:07
Why did it take the Seahawks years to trust Russell Wilson? 17:33
Serena Williams through after a slow start in Paris 18:00
Exeter coach Baxter calls for an end to mass Covid-19 testing in rugby 16:01
Colin Keane has Shane Foley in his sights as they head for Cork 15:52
Crossword Get access to over 6,000 interactive crosswords