Ireland must embrace tag of favouritism

After South Africa, there are heightened expectations of both squad and supporters 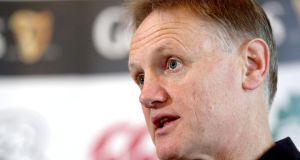 Yet this is something all successful sides have to ultimately come to terms with. No team can stealthily acquire the title of European champions or third best in the world while forever retaining the traditional tag of underdogs. New Zealand deal with more expectations from within and outside than any other team on the planet and although this may have weighed a little heavily at World Cups in particular, successive All Blacks’ coaches have welcomed it.

“I have no doubt that we are feeling more pressure this week. I’m not sure you can shield a team from the public eye and the public expectation because in the end they live in amongst it. Their families are a part of it. They come under the same sort of expectation and maybe pass it on. Friends and family even. They are aware of the expectations.”

In restoring Rory Best and Gordon D’Arcy, Schmidt has picked Ireland’s most experienced starting line-up of this Guinness Series with 611 caps, as against the teams which faced South Africa (496) and Georgia (254).

It had always been the plan to broadly go with these three line-ups, in part because the Six Nations “is not a place to experiment” admitted Schmidt and ditto the four World Cup games. For example despite Stuart Olding’s “super little cameo at the weekend”, Schmidt reasoned that “he has played very little, and to suddenly springboard him into the mix was difficult for us.”

With Robbie Henshaw reverting to outside centre, Schmidt confirmed that D’Arcy’s experience became even more valuable, while it had been the plan to start each of the three hookers, if not necessarily in this order.

That said, someone such as Dave Foley had forced his way in part due to injury but also “on the back of what he did against Georgia and the way he’s impressed us through the training camp” said Schmidt, adding: “what Dave Foley has done for us is give us a massive assurance that he is capable and will become more capable as further opportunity is given to him and as he develops as a young man and a very competent rugby player.”

This led to grumbles of discontent in the province, and Anthony Foley’s avowed desire to see their provincial representation increased, and perhaps now not only are their players more attuned to Schmidt’s ways, but maybe also he has come to appreciate more their work ethic and attention too.

There is, not too surprisingly, more consistency in the Irish selection. Ten of this team lined up at kick-off for Australia’s 32-15 win in the Aviva 12 months ago. Yet despite all the upheavals which the Wallabies have endured, they still retain eight of that starting line-up with the recall of Matt Toomua, who was excellent that day.

As this is one of only four changes Michael Cheika has made to last week’s starting XV, it rather gives the lie to the notion that the Wallabies would rotate more, regarding this as a free hit before prioritising the World Cup dress rehearsal against England at Twickenham a week later.

“Absolutely,” said a slightly incredulous Schmidt. “I think he’s gone as strong as he can. (Christian) Leali’ifano is a super player but Toomua gives you two ball-playing options. He’s played a lot at 10 and he had a super game against us last year. He probably improves the way they can play the game. They can play double-sided from the ruck, play with a second pivot as well as (Bernard) Foley.”

Finally, Schmidt would like if Ireland could win by playing both pragmatically and with flair. “But if you’re not pragmatic against the Wallabies, if you’re not organised and you’re not structured they have too many individual players who can hurt you”, he said.