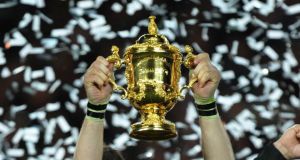 The Webb Ellis trophy: will it be won on Irish soil in 2023? Photograph: Dave Lintott/INPHO

Minister for Sport Leo Varadkar did two good things at the International Rugby Board conference in Dublin this week. He put to bed for good any idea of Ireland hosting an Olympic Games or a Fifa World Cup, because the country is too small. And he pulled on the green jersey for a proposed hosting of the 2023 Rugby World Cup.

Ireland as hosts for 2023 is a realistic aspiration.

South Africa and Ireland have been first to signal their tendering interest, with South Africa believing they have a strong case.

When they last hosted the tournament in 1995, the image of Springboks captain Francois Pienaar and Nelson Mandela was indelibly stamped on the game.

However, Ireland’s internal structures and stadiums tick the required boxes and, combined with a history of running global events such as the Special Olympics and golf’s Ryder Cup, the logistical capital exists in abundance.

The GAA agreeing to allow rugby into their venues earlier this year is crucial to the bid and the association will prosper with Government money available to undertake the upgrading.

Still, the tender may have to be made in tandem with Wales or Scotland, as joint bids are now common.

Joint venture
Even England, who last year staged the Olympic Games, will share the 2015 Rugby World Cup with Wales.

When England hosted the event in 1991, it was a joint venture with Scotland, Wales, France and Ireland. Lansdowne Road hosted a quarter-final and a semi-final.

The involvement of Northern Ireland is important as rugby likes to think of itself as a unifying force, with Belfast being Ireland’s Johannesburg.

The infrastructure is there. The competence is there. What is ultimately required to seal the deal is political nous on the part of the IRFU.